Poverty And Nutritional Security Among Women And Children: Challenges And The Way Forward

By IMPRI Impact and Policy Research Institute in Child Rights, Health and Fitness, Sexism And Patriarchy

Undernutrition accompanied by poverty continues to be one of the greatest threats in India. India comes under the ‘alarming category’ of hunger, which is highest among the world. Identifying aspects of poverty and nutritional security, Dr G Sridevi, Associate Professor, School of Economics, University of Hyderabad, pointed out at a webinar conducted by Gender Impact Studies Centre (GISC), IMPRI, New Delhi, that undernutrition is a multidimensional aspect linked to purchasing power, social behaviour, livelihood sources and survival struggles of people.

Key Takeaways From The Session

Poverty and nutritional security among women and children: Challenges and the way forward for Andhra Pradesh and Telangana 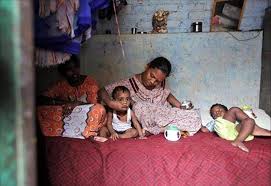 The incidence of poverty is increasing in spite of grandiose development plans and huge allocations reflects the lack or inadequacy of political commitment at the highest levels and wasteful delivery machinery appears validated. Policies must be translated into action plans and timely implemented. In essence, she stated that the problem of the gaps between the evidence and the policy needs to be bridged as the magnitude of the problem, the issue of malnutrition has not received enough attention in public debates and electoral politics.

Also read: The ‘Gig Economy’: Does It Promise A Fair Future Of Work For Women?
You must be logged in to comment.