This International Day Of Education, A Street Play Asks How Safe Education In India Is

Ahmedabad-based Samriddhi Simlai started a change.org petition asking the University Grants Commission (UGC) of India to make it mandatory for every university to release a detailed annual compliance report of their Internal Complaints Committee. The Safer Campuses petition achieved its ask when the University Grants Commission secretary Rajnish Jain directed the vice-chancellors of all affiliated Indian universities and colleges to submit an elaborate ICC report on cases of sexual harassment for the period of April 1, 2018, to March 31, 2019, along with the ICC details, by July 31, 2019.

However, despite the notice that UGC issued, no data has been released on how many universities actually submitted this report, and some universities reportedly continue to remain apathetic to cases of harassment and abuse. Samriddhi hopes to get a response to an RTI application to be able to shed more light on this.

“Working on the petition made me realise how most students and their families were in the dark about legal nuances, the available processes and help, and in general their rights in their educational institutions,” Samriddhi said. “There’s also a culture of silence and taboos that worsens problems. There’s not enough conversation. There needs to be more advocacy and awareness campaigns to draw attention to why, how and where India is still failing its students.”

There’s evidently a lot of work that needs to be done to make India’s education truly accessible, safe and inclusive. Dropout rates of students – especially girls from schools; school-related gender-based violence; inability to provide access to differently-abled and special needs children have all remained some of the biggest challenges in India’s education system. 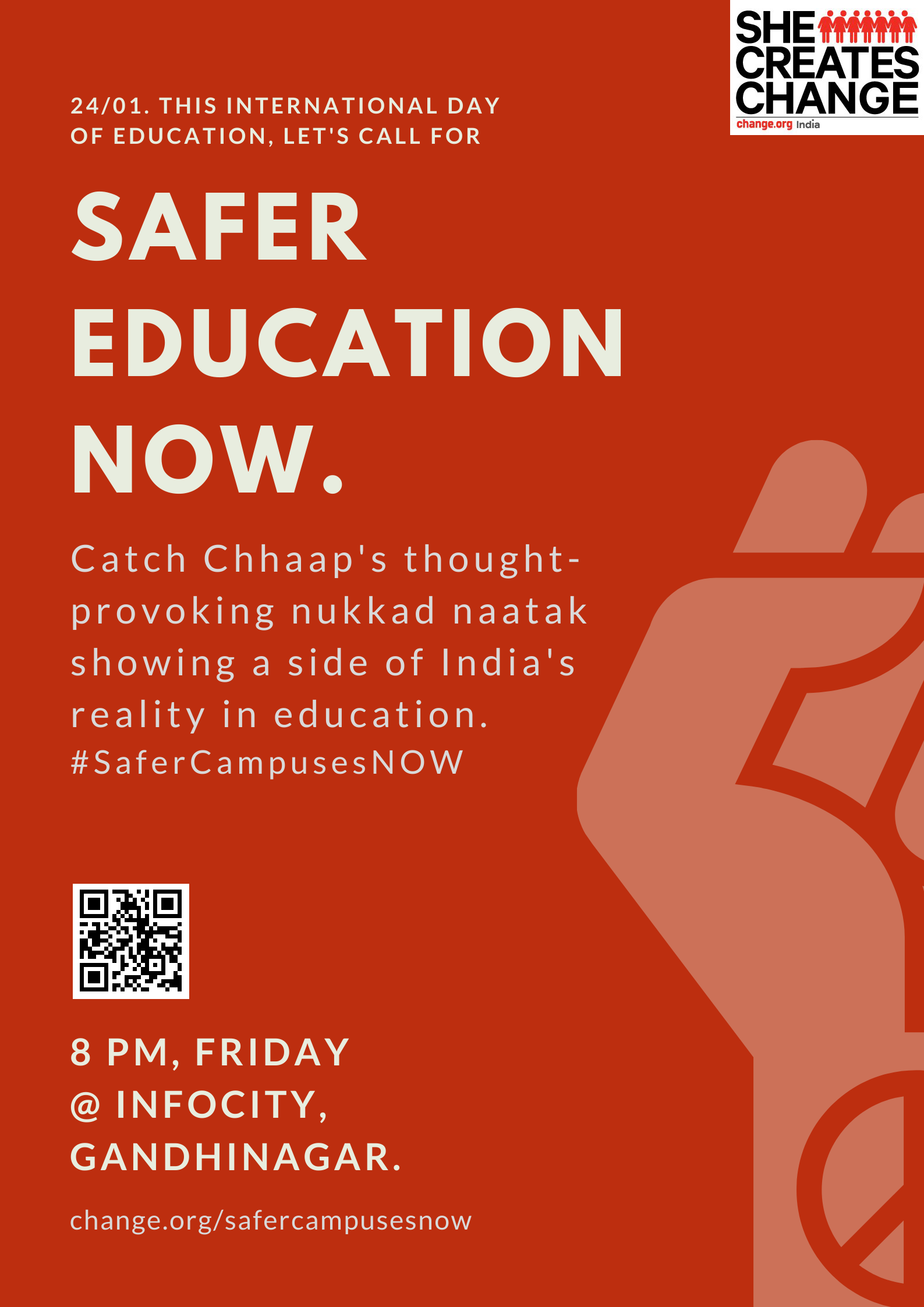 Today, on the International Day of Education, it’s fitting to assess these taboos, injustices and instances of harassment that still hinder education for many students in India. Chhaap, a student theatre group, will be performing a powerful nukkad naatak (street play) in Infocity, Gandhinagar to highlight the same. The nukkad naatak also specifically draws attention to Samriddhi’s petition cause asking for safer Indian universities.

Those of you unable to watch the nukkad naatak in person can follow Right To Safe Education’s handle where the event updates shall be posted and streamed live. The nukkad naataks are being supported by the She Creates Change program of change.org India.

Also Read: Sex Education: Why Avoid Conversation On Something So Basic And Important?