Why Does The GDP Still Count Women’s Unpaid Care Work As An ‘Act Of Love’?

By Oxfam India in Business and Economy, Sexism And Patriarchy, Women Empowerment

Sexist economies are fuelling inequality crisis —enabling a wealthy elite to accumulate vast fortunes at the expense of ordinary people, in particular, poor women and girls. Consider this data, 22 richest men in the world have more wealth than all the women in Africa.

Oxfam released its report,‘Time to Care’, ahead of the World Economic Forum at Davos. Every year, since 2014, Oxfam has focused on issues that affect, amplifies, and exacerbates inequality. This year too shows how the wealth of the top 1% of Indians has seen an increase of 46% while the bottom 50% saw an increase of just 3%.

The focus, however, is on unpaid and underpaid care work done by women and girls, which is extremely important, is the most neglected in our economies.

Unpaid and underpaid care work are the hidden engines that enable the smooth movement of our economies, businesses, and societies, yet the women and girls are among those benefiting the least from today’s economic activity. Despite being the drivers of the economy women and girls do not get an education, or an opportunity to earn a decent living or have a say in how society runs; ultimately getting trapped in the bottom of the economy.

Doing more than three-quarters of all unpaid care work, women often are forced to work reduced hours or drop out of the workforce because of their care overload. Making up two-thirds of the paid ‘care workforce’ working roles, such as nursery workers, domestic workers, and care assistants, they are often poorly paid and provided scant benefits often taking a toll on their physical and mental health.

Due to poor wages that women are paid, women-led households do poorly, economically.

With an ageing global population, it is estimated that by 2030, 2.3 billion people will be in need of care. And given the current situation, the onus is going to fall on the women and girls, who, despite doing well on the education parameters, will be forced to stay out of the labour force. 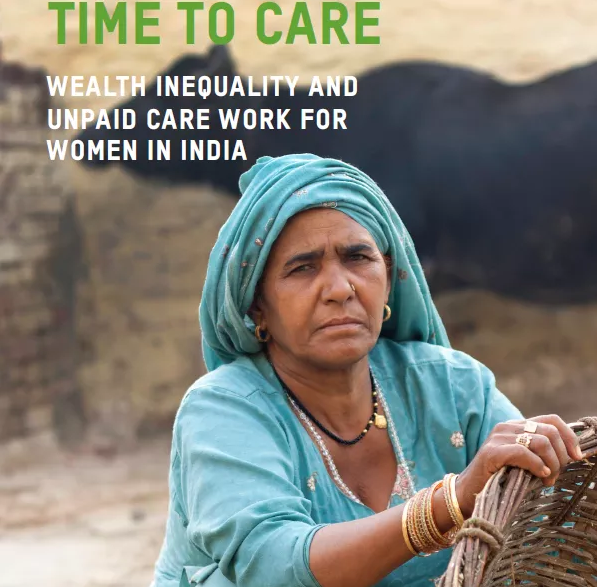 It is an interesting fact to note that most women in India who are in their prime working-age (30-35 years) have reported being only engaged in ‘domestic duties’, i.e., looking after the household and taking care of family members. These not only affect the country economically but also socially; by reinforcing the age-old patriarchal mindset that women are only and only supposed to run households and consequently, they are kept out of the workforce.

While on the one hand, social norms and patriarchy confines women to household and care roles, on the other, the quality of work is questionable with textiles-related vocations followed by domestic cleaning being the two most common professions among urban working women. Among rural workers, 73.2% of women were engaged in agriculture, implying that non-farm jobs for women in rural settings are rare or difficult to access.

The SDGs recognise unpaid care work as a positive contribution to the societal well being as well as the imbalance that is created between men and women due to the burden of such work (which primarily falls on women). There is, hence, a need to address this issue in order to achieve gender equality.

It makes a simple call to “Recognise and value unpaid care and domestic work through the provision of public services, infrastructure, and social protection policies and the promotion of shared responsibility within the household and the family as nationally appropriate.”

Also read: How Men Like Me Benefit From The Unpaid Labour Of Women In Our Lives

The statement makes care work a very important activity in the economy, but is not accounted for while calculating the GDP and instead, is assumed that care work is an intrinsic role for a woman, it is discerned to be an “act of love.”

All these duties often act as burdens and take a toll on the mental and physical well being of women; often adversely affecting their education and aspirations. One important aspect that must not be overlooked is that the whole concept leads to abhorrent cases of violence against women in the household.

If the number of hours that women and girls spend doing unpaid care work is calculated and juxtaposed on the GDP contribution the numbers are staggering.

Women and girls put in 3.26 billion hours of unpaid care work each and every day, this is equal to a contribution of at least ₹19 lakh crore a year to the Indian economy, which in turn is equal to almost 20 times the entire education budget of India in 2019 (₹93,000 crores).

The issue of unpaid care work is central to women’s economic empowerment, and not accounting for it in national statistical systems and economic growth measurements are likely to meaningfully impact policy interventions aimed at improving access to opportunities for women to further their economic agency and decision-making capacity.

The agreement reached by the International Conference of Labour Statisticians (ICLS) in 2013 whereby unpaid work should be classified as work is a firm starting point to mainstream the issue in the national discourse. The 4Rs of unpaid care work —recognise, reduce, redistribute and represent — should be the framework guiding policies and programs that seek to address the skewed distribution of unpaid activities among men and women.

Also read: Are Household Responsibilities Holding Women Back From Participating In The Workforce?
The state plays an important role in reducing the skewed distribution of unpaid work between men and women and the issue should be viewed as a shared responsibility between households and governments. There are certain steps that have been taken by the government to ensure greater participation of women in the workforce, like the amended Maternity Benefit (Amendment) Act, 2019, Sexual Harassment of Women at Workplace (Prevention, Prohibition and Redressal) Act, 2013, and Pradhan Mantri Matru Vandana Yojana (PMMVY).

It should make care a universal right through the provision of a holistic social protection plan in consultation with State governments. The plan must include community participation and should be largely publicly funded.

In addition, reduce the burden of traveling long distances, budgetary support for programs on piped drinking water and cooking gas for poor and ultra-poor families must be provided to ensure that households falling on or under the poverty line receive such services.

It is also important to make the issue of unpaid care work a central feature of addressing and promoting women’s economic empowerment. Gender Equality is not only a means of achieving a healthier financial growth rate, but also is a means to achieve a much wider set of goals including, but not limited, to reduction of poverty, and ending marginalisation, and discrimination.

About the author: Shivam Pal is a guest writer at Oxfam India.