‘We Dissent, We Debate, We Oppose, We Are JNU’

This is not the JNU we dreamt of and it is not the university that we aspired for. Amidst the chaos of illegal action, repressive fee hike and unconstitutional steps taken by the university, the culture of debate and discussion has still survived through the margins of this varsity. But since January 4, violence has replaced the very ethos of non-violence in JNU.

For the past few days, people, masking their faces, along with students from different organisations, have been attacking students of JNUSU (JNU Students’ Union) and also common students, in various corners of this university.

But, all limits were transcended on the evening of January 5 when several masked goons entered the campus, under the watch of the Delhi Police and JNU security guards. Later, they launched brutal attacks on the President of JNUSU, members of JNUTA (JNU Teachers’ Union) and other students, leading to many being admitted in AIIMS as they were injured.

Although Delhi Police has started identifying the people responsible for creating the ruckus, what can be ensured through the videos already circulating is that the miscreants came from outside the campus, under the nose, or in the consciousness, of the Delhi Police, controlled the Union government’s Home Ministry.

The goons were weaponized, with hockey sticks and rods, entering the hostels, vandalising the hostel rooms, and JNU’s security guards stood as mute spectators of the event.

The intention of the JNU security guards, controlled by the JNU administration, and the JNU Vice-Chancellor, are not clear, but, the motive of the masked goons remains clear. The attempt to create a sense of fear and tension amongst the JNU students, as is presently being done in various parts of the country through different mechanisms, remains transparent.

Also read: “What Happened At JNU Is Terrifying And A Reflection Of A Govt That We Cannot Trust”

The present government of India seems to evade the responsibility of creating safe spaces for debate and dissent in universities in the country. Through particular student organisations it has tried to destroy the culture of deliberations and verbal arguments through a democratic setting.

This argument can be easily substantiated by the fact that the policemen stood at the gates of JNU, restricting the mobility of the public, while goons were going on a rampage inside the campus. Similarly, when a student called ‘100’ for help and safety, the alleged response that came was “Where is JNU?”

And, it’s not surprising to a student pursuing higher education in this country, as they are aware that the state machinery is brutal in one way or another, irrespective of the situation where they act or they don’t. But, it saddens them as they realise how the democratic essence of this nation is being vandalised every passing second, where these varsities become damaged in this devastation.

The events of January 5, in JNU, need not be seen in isolation, as a random attack on the students. But, it needs to be understood as the dialectics of the events which are working as a process to shut down the university and destroy the notion of ‘varsity’ in this nation.

Turn the attention to the recent acts of violence on the campus, and one can see that every time, it is particular sections of ‘commoners’, including students, inflicting violence on the campus. This was also witnessed during the 2018 JNUSU elections, which lead to speculation whether it is was a systematic breakdown of democracy by the JNU administration and the current ruling regime.

The plan to shut down JNU has been put into action since 2016, and since then, the process of defaming JNU has continued. The understanding of this can be developed through the chronology of events that happened since Prof. Mamidala took charge as the Vice-Chancellor.

Also read: The Attack On JNU Students Is Nothing But A War Against Free Thinking

Starting from the defamation of the institute as a breeding place of the “Tukde tukde gang” only two months after appointing Mamidala Jagdish Kumar as VC by the then-HRD Minister whose, own education degree is under doubt, JNU witnessed the appointment of ‘loyal’ teachers through unconstitutional processes.

We also saw the destruction of the quality of education by fund cuts for academics, harassing the students with proctorial inquiry and hefty fines, to a system of online entrance examination leading to the exclusion of marginalised sections.

JNU also witnessed the removal of the wall of posters in JNU, which represented the democratic freedom of expression of the students, and the promotion of a privatised model of education by hiking the fees, bringing the self-financed system of education and finally creating an atmosphere of violence. 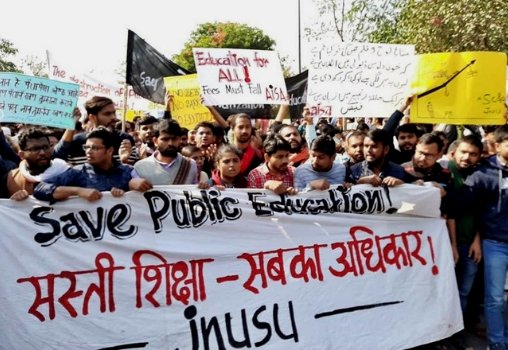 The motive of the ruling regime and it’s ‘sponsoring’ organisation is crystal clear. They want to shut down the university by blaming every unfortunate event on the common students and teachers. But, the reality is the other way around, as recently, in an interview, Subramaniam Swamy said that JNU should be shut down and it should be cleared of all the ‘leftists.’

He also said that the university should be restarted after two years with the name Subhash Chandra Bose University. These types of statements reflect their motive and their greater plan about JNU, and about higher, public education, trying all possible ways to destroy it and change the structure of JNU.

Also read: From JNU To AMU: 5 Times Students Defined What India Wants, In 2019

Yes, their plan is obvious, as one can understand their sense of fear and insecurity as the students of JNU have been playing the role of the sole opposition in the nation, where majoritarian and totalitarianism is rampant. Despite all their attempts, the government cannot shut down this university and silence the voice of the margins reaching the core.

JNU has proved every time that any kind of power exerted on it will have to face resistance, and it won’t be a mute spectator in this process of suppression of democratic voices.

In JNU, we will continue to dissent, we will debate, we will argue, because we are JNU.