By Upama Rai in My Story, Society

On January 25, 2020, a calm Uber ride to Howrah Station suddenly turned violent. The Uber driver upon, approaching the Howrah Station, refused to stop at the location where I usually deboard. The driver had been behaving in a suspicious manner from the moment my co-rider and I got inside the cab.

After telling him repeatedly, and even shouting, that we need to deboard, he said he wasn’t going to let us deboard. I instructed my co-rider to call for help. The Uber app provides an SOS option (which connects to India’s emergency number: 100 and connects you to the nearest police call centre.

I heard my co-rider giving the details of the situation to the person in the call centre who had received our call. Then, my co-rider told me that the person had laughed, and had sarcastically said something along the lines of, “toh ismein hum kya kar saktein hai!” (Then what can we do about it?) and hung up. I was furious.

At this point, the driver, sensing that we had dialled 100, stopped the car. Before deboarding, I told the driver I am reporting him, and took pictures of the car at the location (where we were dropped) for proof.

After deboarding, I made my co-rider call 100 again. This time I listened to the conversation. The person receiving the call again was clueless. He was not comfortable speaking in English (my co-rider was not a Bengali and spoke in English). This person said it should be reported to Uber instead. My co-rider said “Woh hum karengein, but aapka bi help chahiye.” (We’ll do that, but we need your help too.) This man, who was ill-prepared, said, “Toh aap kya chahta hai?” (What do you want, then?)

Next, we were connected to the Traffic Police Department. After listening to our grievance, he took down the car’s number. My co-rider after finishing the call said, “I don’t expect anything to come out of this.”

“I don’t expect anything to come out of this” – the exact thing I heard from my family to whom I recounted the incident. I wanted to take action against whoever received our first call but did not know how to.

We have been socialised to accept our police’s corruption and ineffectiveness. The mere mention of a police complaint makes people faint, nobody wants to get involved with the police, and here I wanted to lodge a complaint against the police itself to the police.

Also read: A Dedicated Body For Road Safety And Traffic Management: The Need of the Hour

By this time my co-rider did not want to get involved as well. Presumably out of fear. Somehow, the idea of lodging a complaint makes people shudder and perhaps they think that some dirt will land on their otherwise shiny CV. People also rushed to defend the police to deter me from lodging a complaint, and they’d point out how, in the second call, the details of the vehicle were taken, and that the police isn’t all that bad as I was making them out to be. Well, if I was murdered by that cab driver there wouldn’t have been any second call, would there? 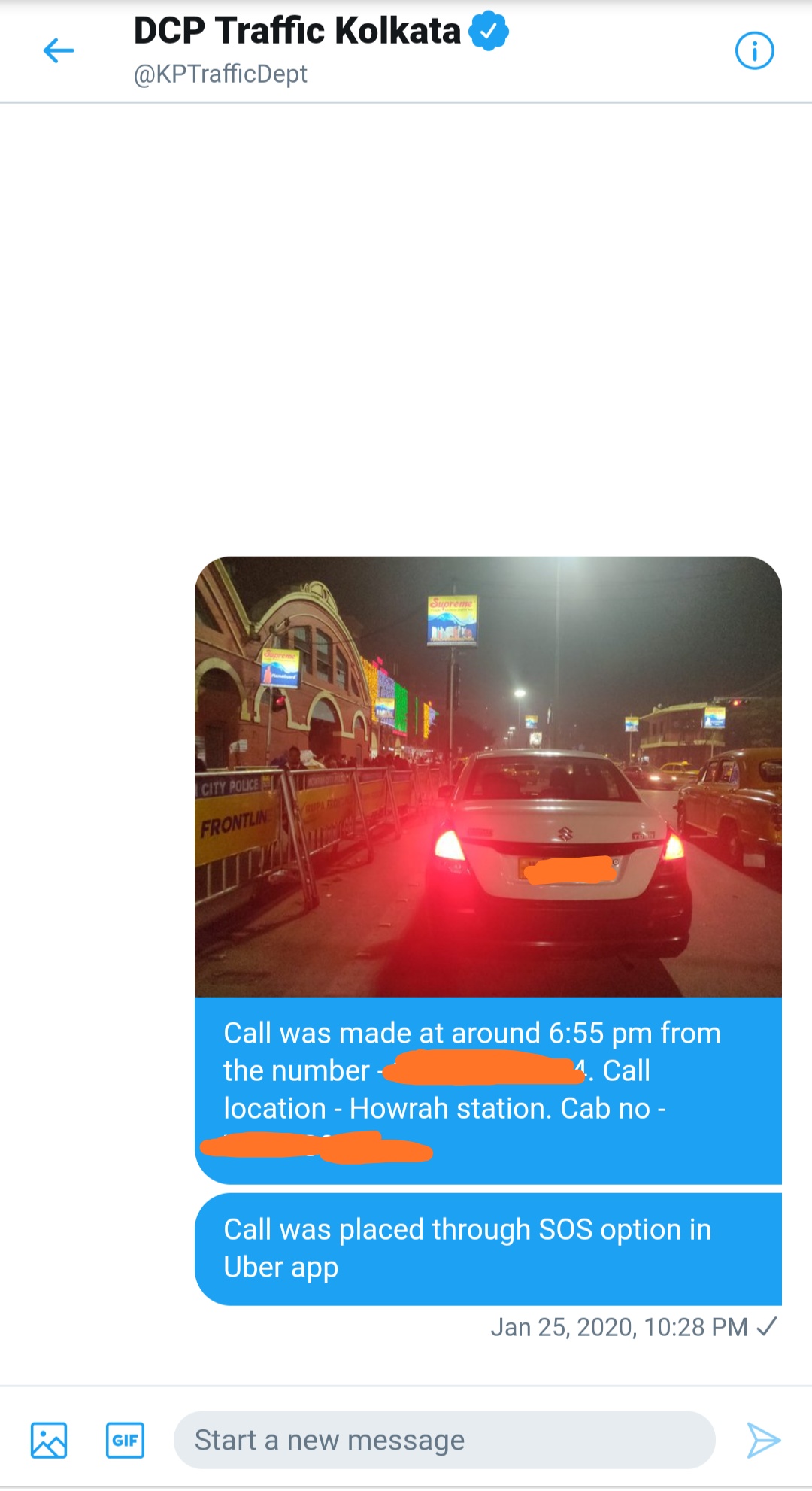 People would agree that what had happened was wrong, but nobody supported me when I had to get a complaint lodged. I was told by my family and friends that if I go ahead with my plan I should be prepared to face harassment from the Police. Perhaps they would ask me what, being a woman, I was doing at ‘that time of the evening’; perhaps I had dressed in a certain way to ‘excite’ the driver, perhaps also, what was I doing with a man at that point of time? Perhaps they would even brand me as a ‘loose’ character trying to accuse an ‘innocent’ cab driver, and their ‘innocent’ call centre employee.

I took to Twitter and bashed the police, demanding accountability. On the first day, the Traffic Police instructed me to DM the details of the call, time, place, and vehicle number. On the second day, they replied that the matter has been forwarded to the Howrah Police. This message was sent on January 26. I am writing this on January 30, with no further update from the Police. 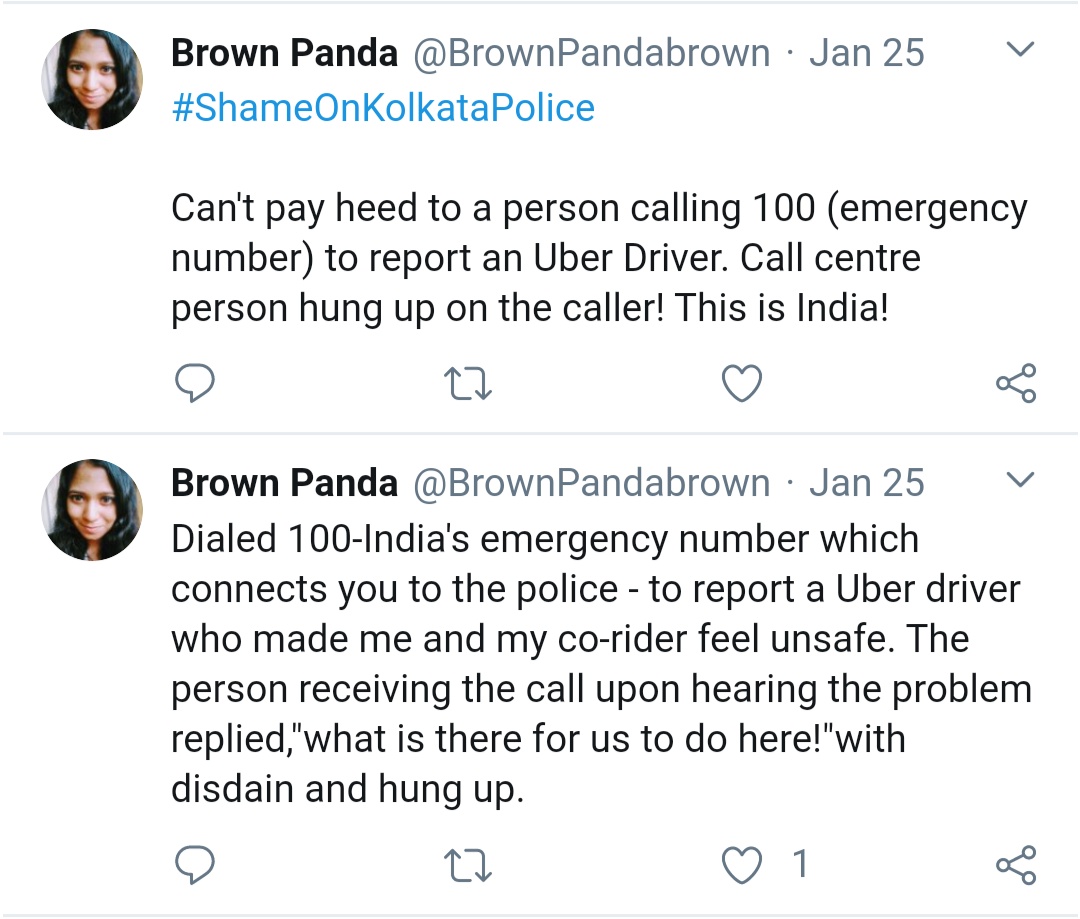 I kept up my demand for accountability on Twitter. Then, the Traffic Police, in a similar vein (similar to the sarcastic manner in which their call centre personnel had ‘laughed’) replied that “It seems you have not seen our reply. Sending you the screenshot of our reply,” and attached the reply they had sent on January 26. 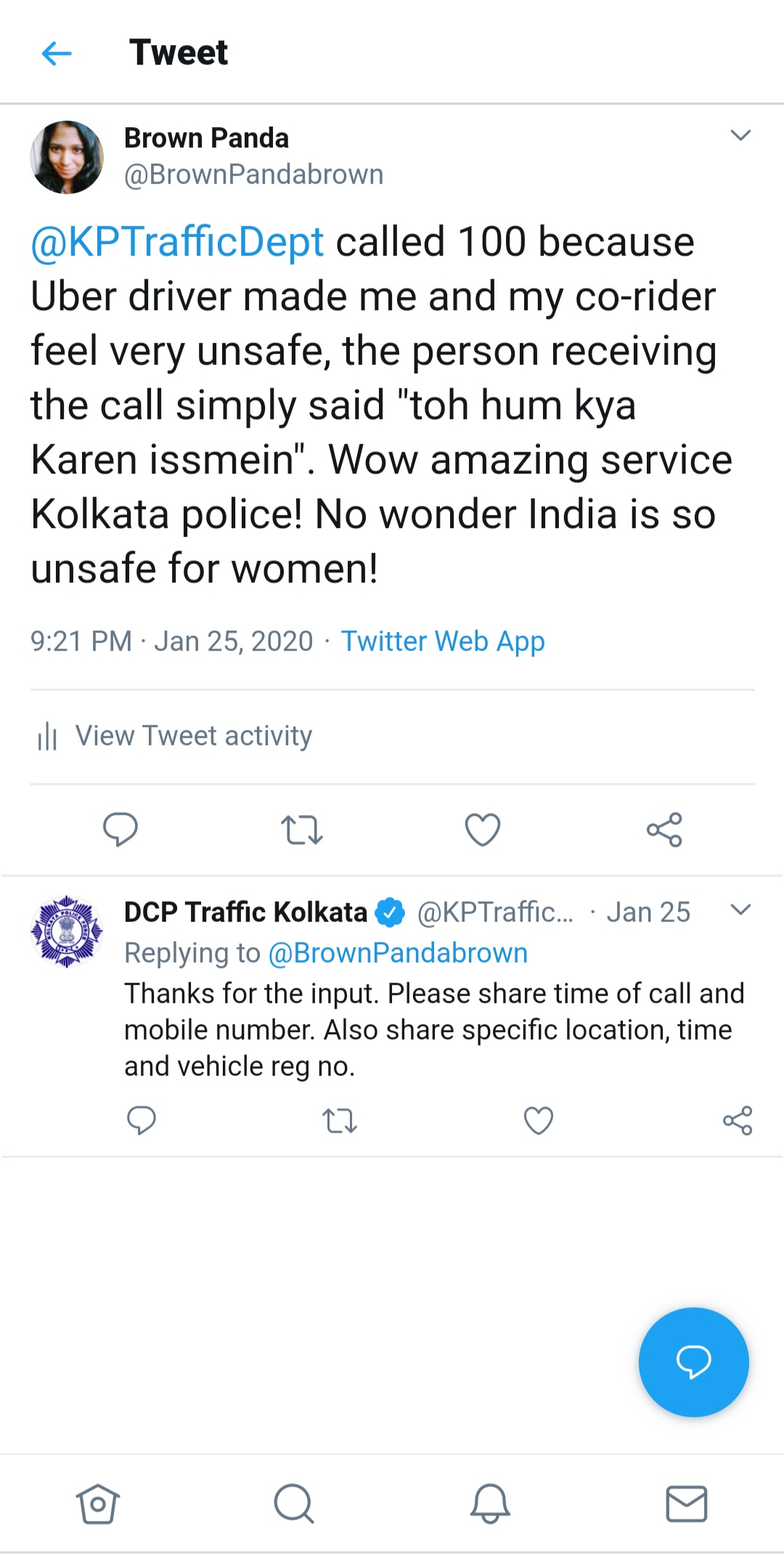 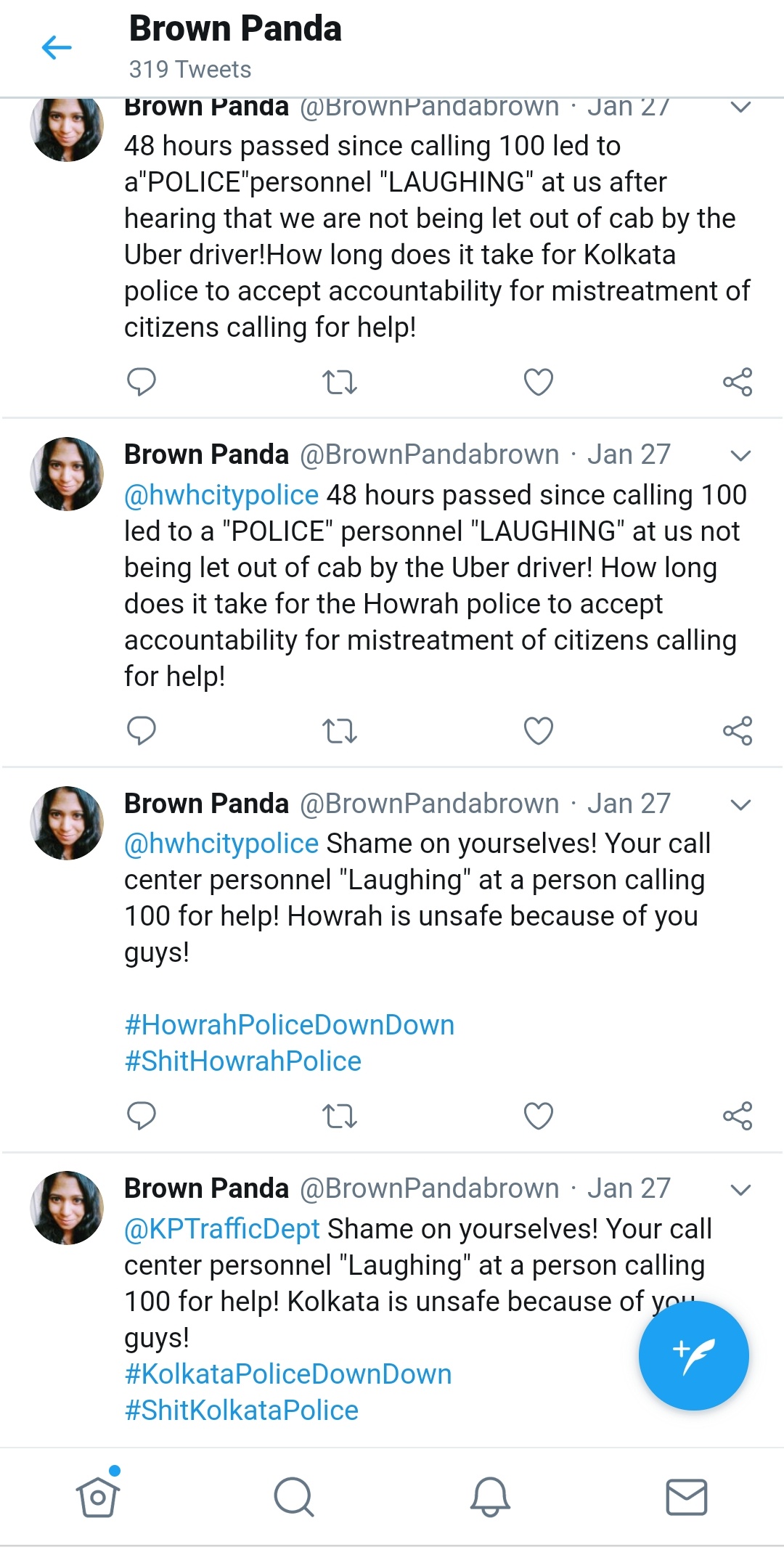 This is the state of India where a call to the emergency number led the ill-prepared police personnel to laugh after hearing our problem. Where, in an emergency situation, instead of offering a solution they hang up. Where they ask you to report to Uber instead. What if I was alone in that cab that evening? What if the driver didn’t stop the car? What if the driver physically attacked me or even shoved me out of the moving car? The possibilities are plenty! 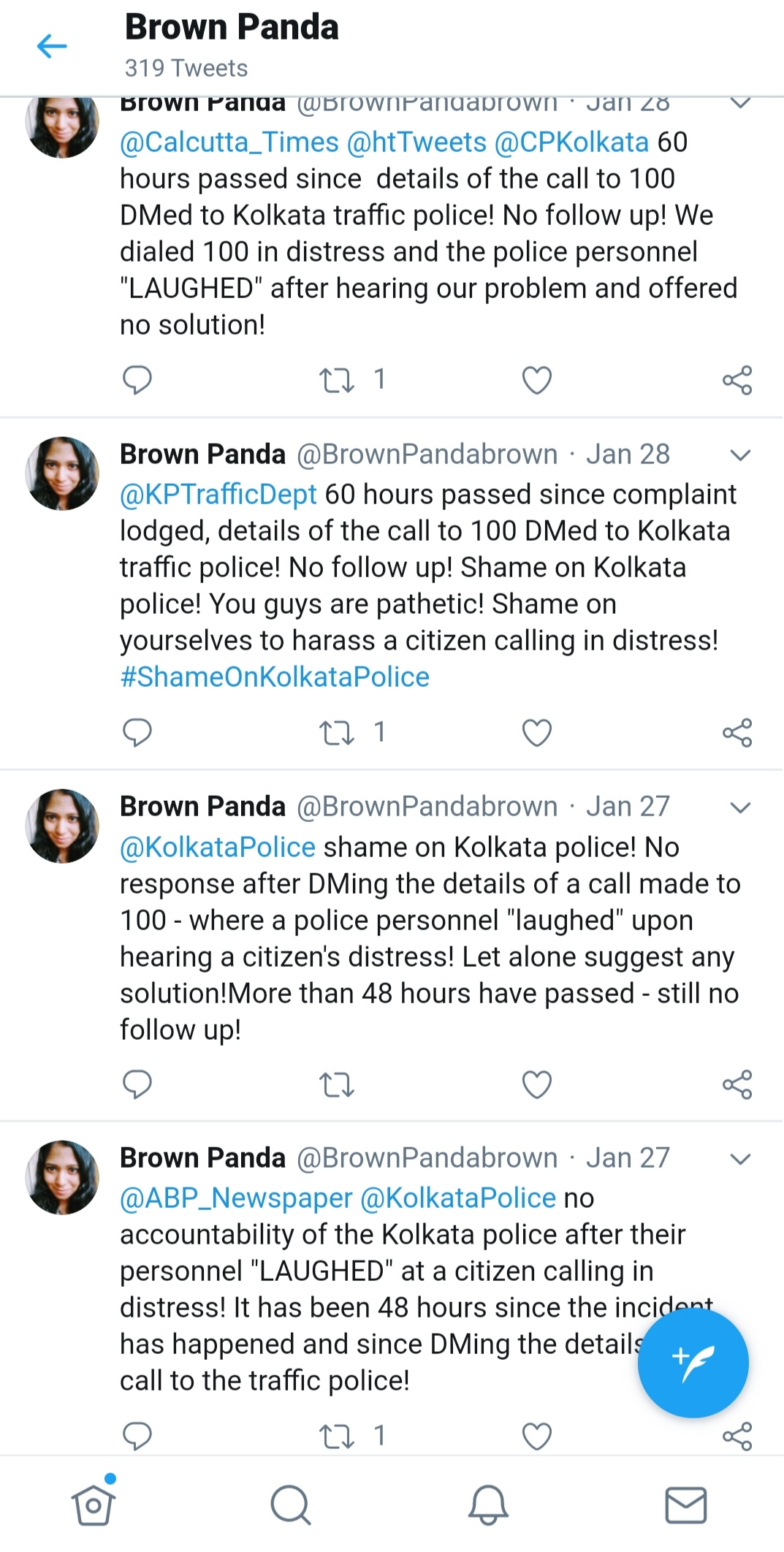 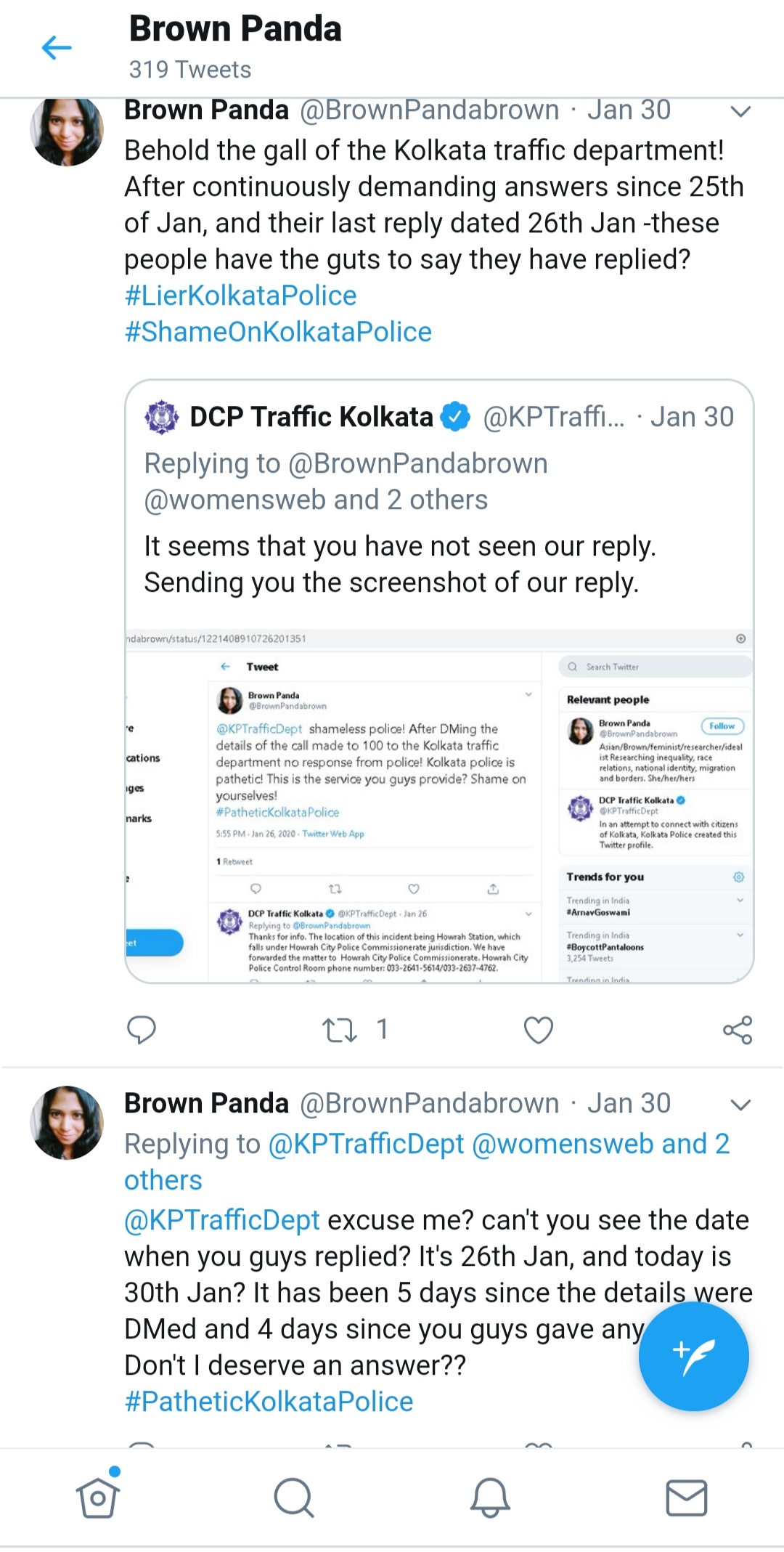 What services are our police providing other than firing at unarmed students, helping goons escape after they beat up students, standing still when a guy brandishes his pistol and shoots at a protester? Being an ordinary citizen what is my recourse to address police corruption and ineffectiveness in our country? Would such policemen, as usual, evade punitive measures?