Union Budget 2020: Here’s What You Need To Know

By ASHUTOSH RABINDRA in Business and Economy, News

In her 2020 Union Budget speech, one of the first things that Finance Minister, (FM) Nirmala Sitharaman, said, was that the people of India gave PM Modi a massive mandate in 2019. She termed GST historic and also mourned the passing of Arun Jaitley, and called him the architect of GST.

She talked about vibrant India. She listed Ayushman Bharat, UPI, affordable housing through PMAY, etc. The FM said that we have moved on from a growth rate of just over 4% to around 7% in 2014-19. Inflation was 9% in the last two decades and India is now the fifth-largest economy in the world.

“The fundamentals of the economy are strong, and that has ensured macroeconomic stability. Inflation is under control”, the Minister reported.

She added that the three prominent themes in the budget are — aspirational India, economic development for all, and a caring society, that is both humane, and compassionate. She appreciated the digital revolution in India.

She added, “Everything that the government does and aims to do is for this pyaara vatan (beloved country)”.

FM Sitharaman announced a 16-point action plan for agriculture, and also added that it will double farmer’s income by 2022.  She claimed the government will focus on 100 water-stressed districts and will help 15 lakh farmers to get solar pumps.

She explained that a total of 6.11 crore farmers are insured under the Fasal Bima Yojna and said that hand-holding of farm-based activities needs to be done. This, she said, can be done in cooperation with states. She stressed on PM KUSUM Yojana and said: “Annadata can be Urjadata too”.

The new budget allocates Rs 2.83 lakh crores for agro and allied sectors. It stresses a balanced use of all fertilizers and proposes the Agri credit target for 2020-21, pegged at Rs 15 lakh crore.

The FM said that the Railway will launch ‘Kishan Rail’ for cold storage, through the public-private-partnership PPP model. By 2030, India will have the largest working population. She proposed FDI and ECB in education; to make the ‘Study in India’ program attractive, an INDSAT exam has been proposed, to be held in Asian and African countries.

A new education policy is to be announced soon, and local bodies will offer internships for fresh engineers. The FM proposed setting up of a National Police University and Forensic University. She also proposed Rs 12,300 crore for the ‘Swachch Bharat mission’.
Furthermore, Rs 99,300 crore for the education sector and Rs 3,000 crore for skill development were proposed; and a medical college would be attached to the existing district hospital on the PPP model.

To attract investments in electronics, the FM proposed a scheme to increase investment. She also proposed a National Technical Textiles Mission, with an outlay of ₹1,480 crores over 4 years to cut down imports. To make every district an export hub, the budget will provide ₹27,300 crores for development, and promotion of industry, and commerce, in 2021. She proposed a Bengaluru suburban rail project for ₹18,600 crores.

A Chennai-Bengaluru Expressway will be started, to monetize 12 lots of national highways by 2024. 100 more airports will be developed by 2024 to support UDAN, and 22,000 crores will be allocated to power and the renewable energy sector.

Proposal for expansion of the National gas grid from 16,200 km to 27,000 km was announced. The FM also said, that very soon, there will be a policy to allow private players to build data centres parks in India.

Fibre to home connections will be provided via Bharat Net, that will link 1 lakh gram panchayats this year. The Bharat Net program will be allocated ₹6,000 crores. She proposed to provide Rs.8,000 crores, over five years, for the National Mission on Quantum Technology and Applications.

The minister also announced that five archaeological sites are to be developed, in Rakhigarhi, Haryana; Hastinapur, UP; Sivasagar, Assam; Dholavira, Gujarat; Adichanallur, and Tamil Nadu. Also, the Indian Institute of Heritage and Conservation is to be set up, with the status of a deemed university.

The turnover threshold for an audit of MSMEs is to be increased from Rs 1 crore to Rs 5 crore, and for those businesses, which carry out less than 5 percent of their business in cash. Dividend Distribution Tax (DDT) was also abolished and now companies need not pay DDT.

She also proposed an investment clearance cell for entrepreneurs, to provide information related to land banks, pre-investment advisory, and facilitate clearances.
She added that the government will grant a 100% exemption for sovereign wealth funds in infrastructure.

A reduction in tax on cooperative societies from 30% to 22% was proposed. Also, the government will list LIC on the stock exchange.

The FM announced that the government will introduce a taxpayer charter and make it a part of the statute; this will avoid citizen harassment.

The FM talked about simplification of Income-tax, she added “an individual pays 20% on income between ₹5 lakh and 10 lakh” and the process is burdensome, so she proposed a new simplified PIT regime, wherein IT rates will be significantly reduced for those who forgo 70 exemptions.

We can understand this from this table: 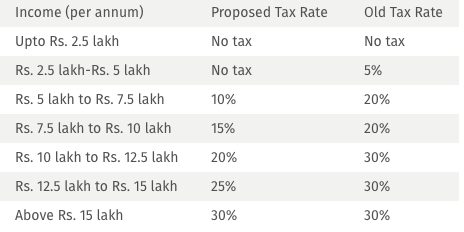 She also clarified that it is optional; those who want to be in the old process with exemptions can continue to pay at the old rates. “A new personal income tax rate will entail an estimated revenue foregone of ₹40,000 crores per year”, as reported here.

She further added, that more than 100 exemptions of different natures are currently provided in the IT act, and she has removed 70 of them in the new regime and the rest of the exemptions will be reviewed in the coming years.

Also read: Watch: The Truth About The Impact Of Protests On The Economy

Instant PAN based on Aadhaar has also been proposed. Aadhaar-based verification for GST compliance to be introduced to identify fake names. To boost ‘Make in India’, imports under FTA have been increased. There will be a customs duty hike on footwear and furniture.

The Finance Minister cut-short the speech, after two hours and forty-one minutes, because she was feeling unwell. This is being called the longest budget speech ever.“She told the Lok Sabha that there were only two more pages and the Budget should be considered read.”