Left And Right: The Dance of Democracy, And What’s ‘Left’ For The Left?

By Raunak Kumar Singh in Politics

The French Revolution of 1789 was a landmark moment in world history. For the first time, it brought the ideas of republicanism and democracy to the forefront. It talked about rights as well as the principles of liberty, equality and fraternity, which went on to become the fundamentals of governance across the world. Much in line with these timeless political terminologies, it also gave us the political scale of ‘Left’ and ‘Right’.

In a largely two-party system, it’s quite easy to brand the left and the right based on their relative social and political stand; therefore, both are, at times, equated with the terms liberals and conservatives respectively. However, in a multiparty democracy, there are too many formations, along with often contrary social and economic aims, so it becomes quite difficult to mark them clearly as left, right or centre. And so emerges the political positions of centre-left, centre-right, far-left, far-right, liberal-left, and liberal-right.

Unlike the western democracies, which, until the recent times, lacked any strong electoral communist party and any far-right communal party, India has been witness to both of them. Both had their own uniqueness and I would better contend contrasting political trajectories and electoral fortunes. The rise and fall of the two opposite trends of politics can better be understood by dividing India’s post-independence electoral history into four phases. Let’s look at them one-by-one.

The two extremes of this phase mark the first general election of independent India (1951-52) and the formation of the first non-Congress government at the centre level (1977). In the first decade of independent India, the right-wing was missing from the political scene and it was largely the contest between the Congress party and the ‘radical’ Communist Party of India (CPI).

The CPI, with the legacy of recent Telangana and Tebhaga movements, coupled with the communist euphoria across the world, was the only political formation to pose any significant threat to Congress. Although quite less as compared to Congress, it steadily increased its seats in the Lok Sabha in the first three general elections. Besides this, CPI became the first democratically elected government across the globe in the province of Kerala in 1957. 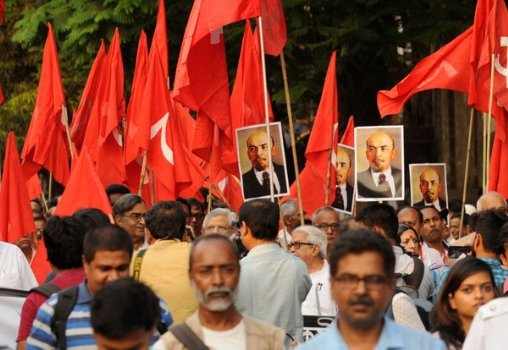 The Indian communists suffered a severe backlash in 1962 for their soft attitude towards China and subsequently suffered a split in 1964, much on the lines of global Sino-Soviet split. It suffered further divisions with the rise of Naxalbari uprising in 1967. Clearly the Indian left was battling within itself instead of Congress or the rising Swatantra Party.

The deeply divided comrades were further divided when Congress lured CPI faction into governance. Clearly this situation led to disillusionment within the left spectrum. Left-wing extremism, too, played its own part in creating a sense of fear among the public.

Although the left was able to hold on to its decent number of seats in the Lok Sabha and governments in Bengal and Kerala, the idea of a Communist revolution was now a foregone conclusion, which was once considered inevitable.

The Indian right gained significant importance much later than the left, with the formation of the Swatantra Party by ex–congressmen like C. Rajgopalchari, K. M. Munshi and others. It was a classical ‘right’ party, with a market-oriented ideology, which sought to counter the command-economy model of Nehru. The founding leaders were visionary and were themselves a product of the national movement. Though conservative in approach, they were not communal and were open to liberal ideas. They could rightly be labelled as the centre-right ideologues, which are missing in present-day India.

It won fairly decent 18 seats in its first elections of 1962 and went on to become the largest opposition with 44 seats by 1967. It even became the principal opposition party in the states of Odisha, Bihar, Rajasthan, and Gujarat. Unfortunately, it went into oblivion with the death of Rajaji in 1972. I consider it a lost opportunity of the rational, principled, and articulate right.

The other right party, the Jana Sangh, although with bits and pieces of electoral success, couldn’t make much impact on the Indian political scene and merged with the Janta agglomeration during the post-emergency elections. Failure of the Janta experiment and disbandment of the Jan Sangh created a void in the Indian right for some time.

The foundation of the left politics was further jolted in this phase when it lost ground in the heartland states of UP and Bihar to the proponents of social justice by the second half of the 80s. The left was now only to be visible in the pockets of Bengal, Kerala, and Tripura. However, the left continued its dominance among the intelligentsia, media, literature, which were still a dream for the right.

The right, too, was shunted in the national arena for about a decade, for example, the Bharatiya Janata Party (BJP) won just 2 seats in the 1984 elections. However, it was provided oxygen by the Rajiv Gandhi government itself with the Shah Bano case and subsequent opening up of (Ayodhya) temple doors. The growing anti-incumbency (of the Rajiv government) and the renewed interest in Lord Ram helped BJP to find a foothold in the electoral map of India with 86 seats in 1989.

This period was to see a contrast between the hesitant left and the growing power-hungry BJP. Both started by supporting the JD government of V. P. Singh, but then Mandal (Commission) came in between. While the left struggled to find the answer to the Mandal Brahmastra, the BJP, under Advani, ventured upon the risky Rath Yatra.

Having realised its politically potential, Advani did bow down to allow more the accommodative Vajpayee for the PM post. Contrast it with the left, which, yet again deeply-divided, stopped Jyoti Basu from becoming the PM in 1996. Although CPM still doesn’t admit to this mistake, Jyoti Basu himself called this a historical blunder.

While Vajpayee established a 22-party coalition running it successfully for a term, and tried to give the BJP a pan-India character, Indian left, on the other hand, despite getting its best-ever result in 2004, went for ‘outside support’.

If played wisely it could have got several important ministries in the Manmohan Singh’s government and thus could have shown their ability to the nation. Unfortunately, our comrades lived in a Utopian world.

The left, now under the Karat camp, learned no lessons from its previous mistakes and ventured upon new misadventures. The most infamous being withdrawing support from the United Progressive Alliance (UPA) government over the Civil Nuclear deal. Further, it was beaten in its own game in the battleground of Singur by Mamata didi. Having lost Bengal in 2011, the left moved towards irrelevance in the growing market-oriented 21st century India.

The hardliner Karat camp, who seemed in no mood of revising their classical Marxist strands, were reduced to just above double-digit in the phenomenal elections of 2014. Their fort of Tripura was further crumbled in 2018, and the last general elections they’re reduced to a single digit, that too at the mercy of Dravida Munnetra Kazhagam (DMK).

Also read: Opinion: With Propaganda Politics At A Peak, Democracy Is Slowly Vanishing Into Oblivion

The BJP, on the other hand, did everything that the left did not. They worked hard at the grassroots level with RSS support, enhanced their media and social media presence and most importantly came up with a narrative which was appealing to the growing middle class. Riding on the huge anti-incumbency of the Manmohan government, the BJP, under Modi, came into power with a thumping majority. Despite getting the majority at the centre, the BJP, unlike the left, didn’t stop there. They continuously tried to expand beyond the Hindi heartland, deep in the South as well as in the Northeast.

With six years of the Modi government, the left not only lost its electoral grip, but also the socio–intellectual group, as the RSS-BJP made inroads in the varied domains of media, cinema, and universities. Looking at the state of affairs of the left, the question obviously needs to be asked, “what’s left for the left?”