By Rupsa Nag in Art, Culture-Vulture

The Kolkata People’s Literary Festival (PLF) was conceptualised by Bastar Solidarity Network to uphold and assert dissenting voices, with the idea to ‘orient literature to its critical social function.’ The Bastar Solidarity Network had been formed by students and activists as a forum to shed light on and protest against human rights violations in Bastar. Over the years, BSN has expanded its social and political concerns to all–people movements, which are resisting against caste, class, religious, regional and gender-based dominations, all across the country.

Lavish corporate literary fests naturally do not represent the resisting groups because they are part of the state-corporate nexus that are displacing various local communities, including the Dalit community, everywhere. For example, the Tata Steel Kalam could, in the same breath, invite Kanhaiya Kumar, a member of the student’s wing of the CPI, to be a panelist at a time when only recently several people in Kalinganagar, Odisha had lost their lives protesting against land acquisition by Tata Steel for a project.

Some students who were attending the event, including members of the Bastar Solidarity Network, had questioned Kanhaiya Kumar’s stand, given that he was speaking at a fest sponsored by the same corporate. That question began a debate concerning the politics and role of corporate-funded events, and how, on such occasions, even when they give space to people’s literature, it amounts to gross appropriation and effective depoliticisation of such texts and their authors. In doing so, they erase histories of systemic oppression across the country in areas like Bastar, Niyamgiri and Kalinganagar, often with no mention of them. 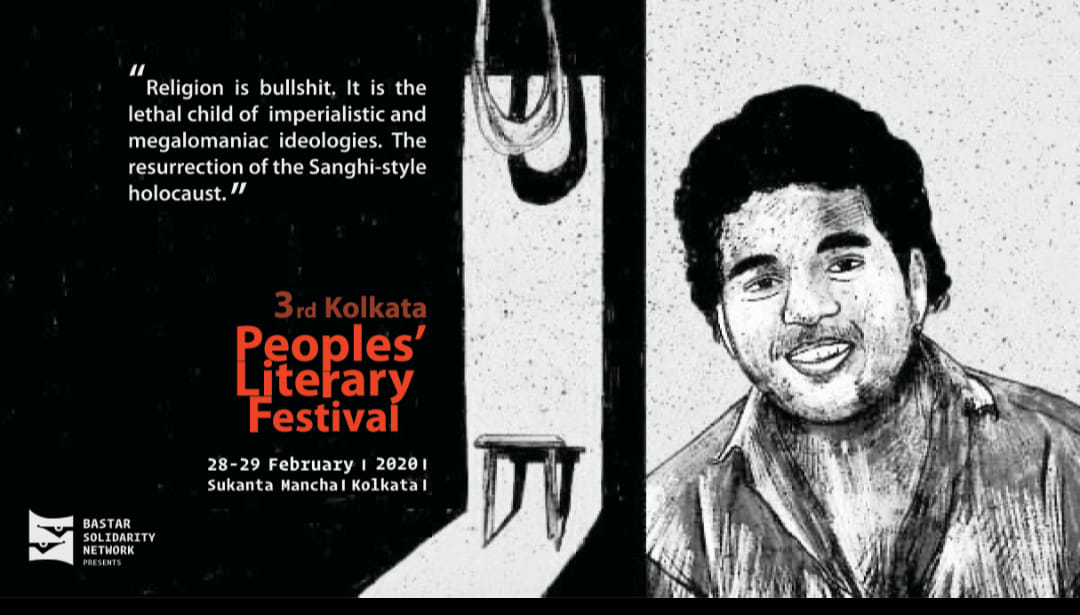 The conduct and promotional design of these fests speak volumes regarding their capitalist relationship with only an elite and exclusive section of the artist community, which itself is characterised by vulgar hierarchies, erasures and an appropriation of the cultures and labour of artisanal communities. This year, in face of the extreme crises and country-wide anti-CAA-NRC-NPR protests in India, the Tata Steel Literary Festival held a panel titled ‘Awakening Bharat Mata’ with BJP MP Swapan Dasgupta in conversation with Prof. Bidyut Chakrabarty, Vice-Chancellor (now infamously known for installing CRPF within Viswa Bharati University premises). The panel saw student protests during the event where they were manhandled by the security and asked ‘not to protest while the event was ongoing.’

Having no core values binding them, such literary festivals tend to deal with art as a commodity. But the PLF stands with voices that get overshadowed by what is popularised by the state-corporate liaison. This realisation was the seed of what was to become First People’s Literary Festival (Kolkata chapter) in 2018, organised by Bastar Solidarity Network; whereby they took their ideas further in search of an alternative way of organising literary festivals that aligned with their position regarding art.

The first year of this festival, 2018, brought together authors and activists such as Arun Ferreira, Varavara Rao, Inshah Malik, Rinchin and many others. The year also saw panel discussions such as ‘They do not let us sing’ on anti-fascist art and literature, moderated by Vernon Gonsalves and attended by Prof. Ghazala Jamil, activist-poet-journalist-literary critic Varavara Rao, and Telegu author Skybaba. 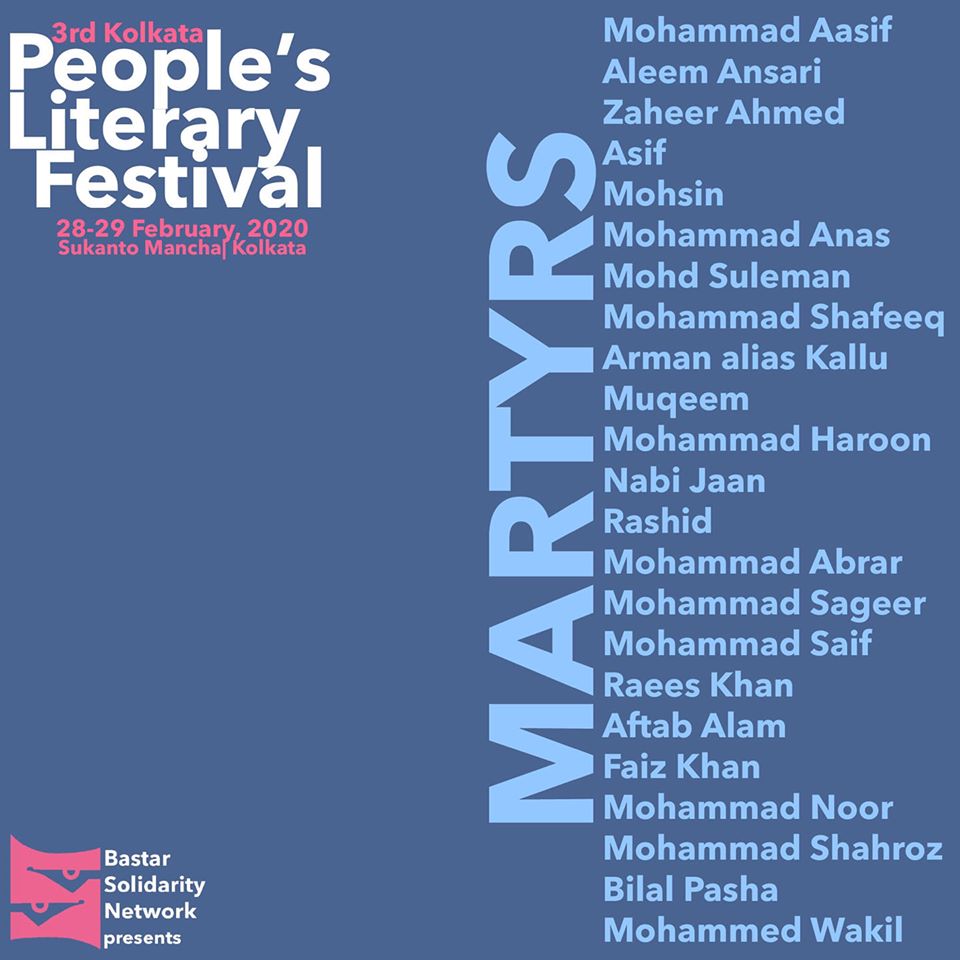 The 3rd edition of the Peoples’ Literary Festival is being organised in a year which has started as a spectacular consolidation of people’s resistance from every nook and corner of an India that has been plagued by the Hindu fascist and divisive politics of the current regime. Over time that has passed, people have come together to resist and revolt, and we now have Shaheen Baghs all across the country.

What started as a students’ protest in Jamia Milia Islamia and Aligarh Muslim University has gradually brought together various sections of the society, revealing to the citizens not only the demon that CAA and NRC is, but also how it has brought forth multiple layers of struggle that many regions of India have been going through for the longest time — the biggest example being Kashmir, which has been under a shutdown for about six months now.

A major part of the protest has been led by art that has emerged from and for it. Ranging from raps to parody, paintings to nazms, protest art galore in the face of oppression. One does not know what is to unfurl, but People’s Literary Festival seeks to celebrate these voices of resistance and stand up against the capitalism-aided fascist suppression as it always has. 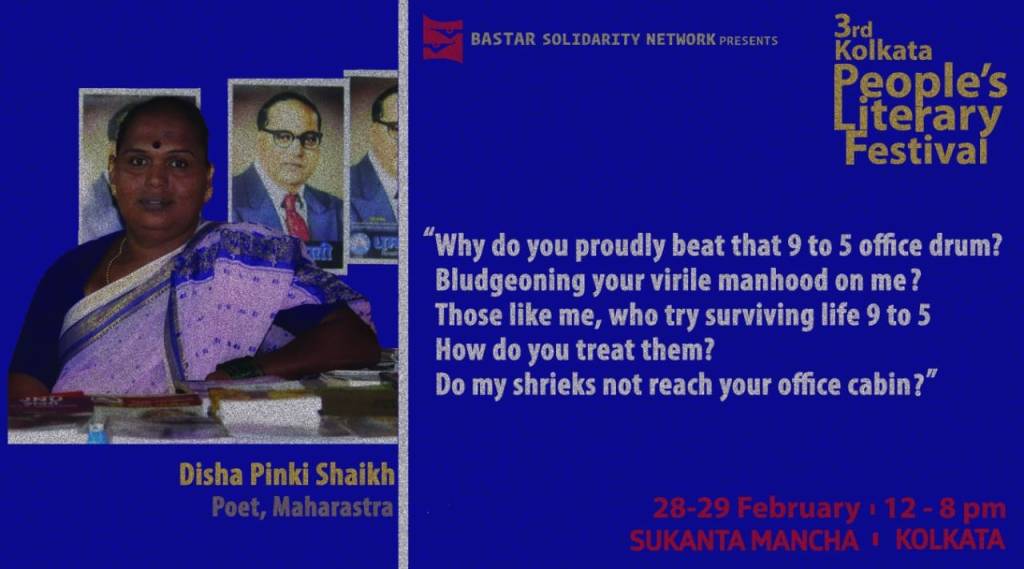 To differentiate itself from other festivals, the Kolkata People’s Literary Festival is entirely crowd-funded, put together by students and activists, free from the diktats of any form of corporate and government sponsorship or funding, and hopes to remain so in the days that are to come; a people’s festival.