Dark, Violent, Unjust: This Is Why I Won’t Be Reading The Story Of Eklavya To My Children

By Shikha Sharma in Books, Caste

I learnt the story of Eklavya—that brilliant warrior who was asked for his thumb as gurudakshina by Donacharya to disallow him from wielding the bow—from my Class V English textbook. I still remember feeling an overwhelming sense of sadness reading it the first time. Something about the story didn’t feel right. And it wasn’t about how unfairly Eklayva was treated.

Why would Eklavya look up to someone as conniving and vicious as Dronacharya? And How could he just give away his thumb? I wondered what I would do if someone asked me for my finger. The thought grossed me out. 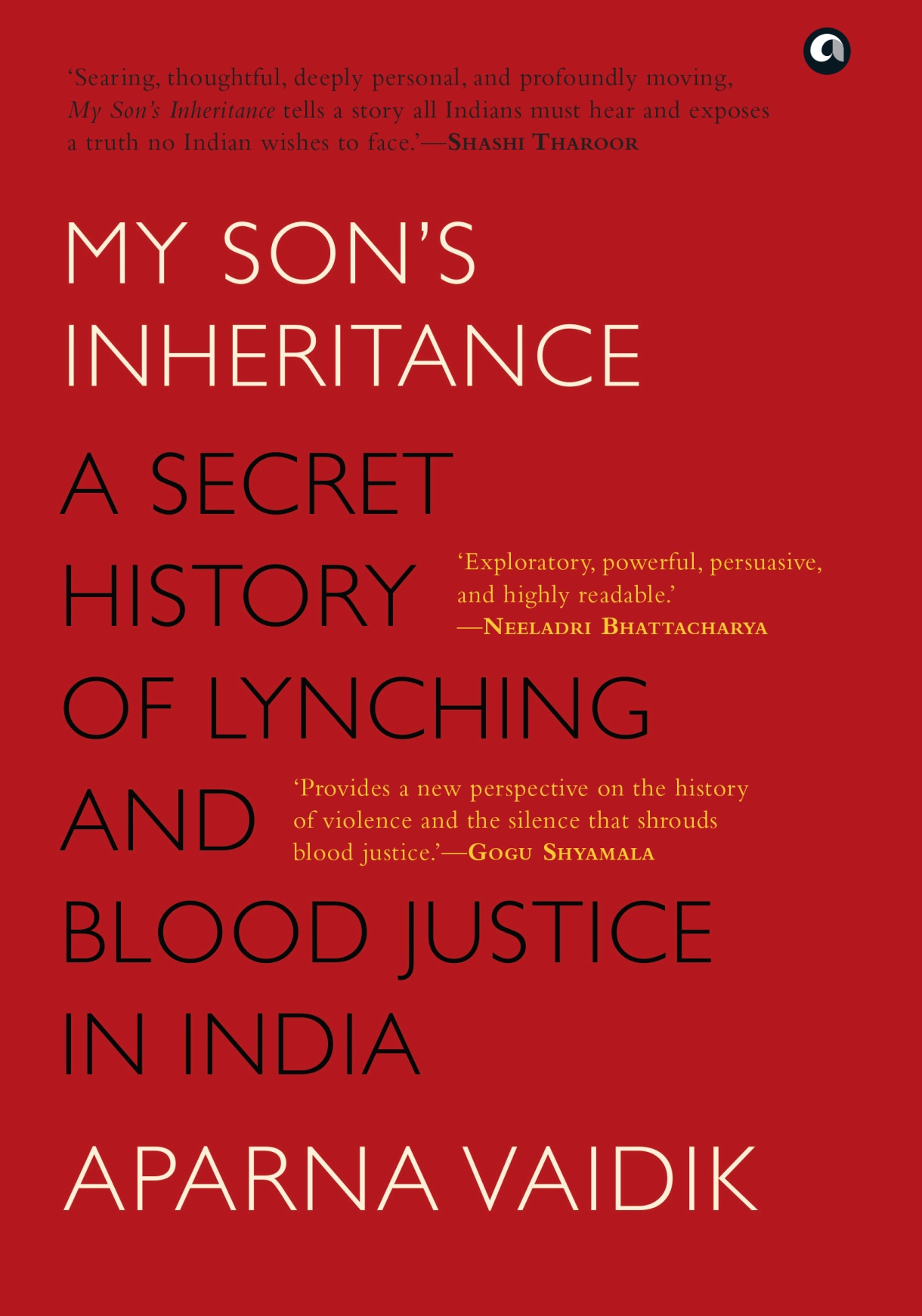 Suffice to say, I remained conflicted about Eklavya’s story, until I picked up My Son’s Inheritance: A Secret History of Lynching and Blood Justice in India by Aparna Vaidik.

My Son’s Inheritance is a provocative and disturbing examination of the history of violence and lynchings in India. It is gutsy and groundbreaking, and not just because it dares to touch a topic few historians have the temerity to broach today.

Traversing several centuries, Vaidik’s book exposes the violence embedded in the myths, folklore and literature that we have been learning as children.

It seeks to cure the mass delusion we’ve been entertaining about our country for generations: the myth of a secular, non-violent and tolerant India.

“Political analysts and social scientists describe this ( the violence and intolerance) as a new phenomenon in Indian politics. However, is it really the case that India is gradually becoming indifferent to or tolerant of the violence because of its excess? The evidence says otherwise,” Vaidik writes in the book.

Myths are different from history, in the sense, they are not real. Yet, myths affirm a culture’s sense of being and meaning in different ways: they order a society’s past, legitimise social institutions and practice, and help create and maintain social cohesion. Consider them to be the glue that anchors a culture to its values, that orders its sense of right versus wrong.

They are also a good indicator of understanding power and social privilege because writing helps legitimize the stories of those with access, knowledge and choice. The ones who become heroes in our myths acquire the right to exist in these stories, and the ones who don’t, become either villains or outsiders and are mostly largely invisibilized.

Where was Eklavya placed in the Mahabharata? And what does the story of his sacrifice convey?

The secret to understanding this lies in exploring the socio-political landscape in which Eklavya’s story is set, as well as the way his story is written. And it is this that Vaidik beautifully deconstructs.

Eklavya is a Nishad (a community of forest hunters considered Mleccha). Although a mighty warrior, he is not an Aryan and thus not ‘fit enough’ to be trained by Dronacharya. How does he become the hero of the story? By willfully sacrificing his thumb to Dronacharya.

The necessary precondition for him to get the hero status is thus not his might, but his sacrifice. Eklavya’s sacrifice also ensures another vital thing: it seals Arjuna’s status as the mightiest warrior, since there remained no scope of Eklavya challenging Arjuna’s might.

The Eklavya myth, therefore, does two things: it legitimizes society’s ‘order’ of things, and it does so by normalizing or invisibilizing violence.

The Secrets Hidden In Our Myths

Once you see the anatomy of the myth, it’s difficult to unsee it. Once understood, you can trace the pattern across India’s entire mythological landscape. Consider two more examples from the Mahabharata: Karna and Barbareek. Karna is a sutputra (the son of a chariot driver) whose armour is asked for by Lord Indra rendering him defenceless in battle.

Barbareek is a fierce warrior, the son of Ghatotkacha, who could have changed the outcome of the war at Kurkushetra, single-handedly but was stopped from doing so by Lord Krishna. While Karna had to give away his life to earn the hero’s status, Barbareek’s head was cut off by Krishna so that he could not upstage Arjuna.

“Barbareek, Karna and Eklavya all had ritually unacceptable birth status or societal location. All three were robbed of what was most precious to them in order to ensure Arjuna remained the mightiest of warriors,” Vaidik writes.

One can also tease some details about how these ‘heroes’ were looked at from the way their physical appearance has been described in the books. For example, the Puranas, Jain texts and the Mahabharata list Barbareek as belonging to the Mleccha tribe, the word Mleccha being a pejorative term used for foreigners beyond the varna system. They would mostly be tribes living in mountains, coasts and forests. Barbareek was named so because of his bushy hair – a reference to his non- Aryan ‘rakshasa’ origins.

Also read: Why Does The Urban Upper Caste Continue To Remain Oblivious To Casteism?

Other details on the power dynamic can be teased out from who ultimately wins in the stories. Through the Mahabharata, the Pandavas remain the historical victims, Arjuna the mightiest warrior, and Krishna a messenger of peace. They can do no wrong.
Karna, Eklavya and Barbareek, earn their way to greatness, by paying the blood price and making Arjuna a mighty warrior. They are only accorded greatness when they become sacrificial lambs willingly to atone for their ‘low birth’.

These similarities in storytelling are present in all great Indian myths beyond the Mahabharata, from the story of Mahishasura ( the ‘asura’ king who defeated the devas and was later vanquished by Goddess Durga) to King Bali, the mighty asura king who was condemned by Vishnu’s Vaaman avatar to hell to restore the universe’s ‘cosmic order’.

In all these myths, it’s the low born characters who have to pay the price to maintain ‘the order’ of things. Our Gods murder and kill, but it doesn’t occur to us to question this violence. Every injustice on their part is spun in the colors of redemption and liberation, justified in the name of dharma. Concealed by the virtue of our religious myths is India’s secret history of blood justice – something generations of Indians continue to internalize without question.

What Eklayvya’s Story Taught Me

While writing this, I started wondering about what the 10-year-old me learnt from reading Eklavya’s story in school. There were obviously the lessons my teachers wanted us to remember: respect for authority, the virtue of sacrifice, the unquestioning obedience to a master.

But I think I also internalised a few things on my own, without anyone having to spell the lessons out. Eklavya’s story taught me that merit didn’t matter as long as you weren’t from the right standing. That the system doesn’t like outliers and mavericks, and finds a way of punishing them.

Eklayvya’s story, like the story of Karna and Barabareek, should anger any egalitarian, liberal society. It encourages us to blindly conform, follow and obey authority. It fosters the belief that some of us are less deserving than others because of our social backgrounds. It normalizes violence against the social other, and tells us it’s okay to look the other way.

This conditioning manifests itself in different ways in India today – in the invisibilisation of entire sections of Indian society, the othering of Dalits, Muslims, and the Christians, and in the justification of victimizing communities in the name of honour and social justice.

We continue to believe in our self-righteousness and goodness, blind to the spin peddled our way. The social structures responsible for this violence continue to be respected and celebrated, as we live in a state of collective delusion.
The myths continue to be told and retold, becoming the parables of our times.

Also read: What Savarnas Fail To Understand About Casteism