By Almas Saeed in Politics, Society

At the outset, the title of the piece ‘How Men turned a Peaceful, Women-Led Protest into an Excuse to Riot‘, by NP Ashley (March 8, 2020), is highly reductionist as he doesn’t bother to mention the men in the question and categorically reduces an allegedly premeditated pogrom into a riot, pitting men against women, as he glosses over the complexities in the “macro-male world order” and ‘violent male assertion’ that he so emphatically rescues the women, precisely the Muslim women from drowning in. 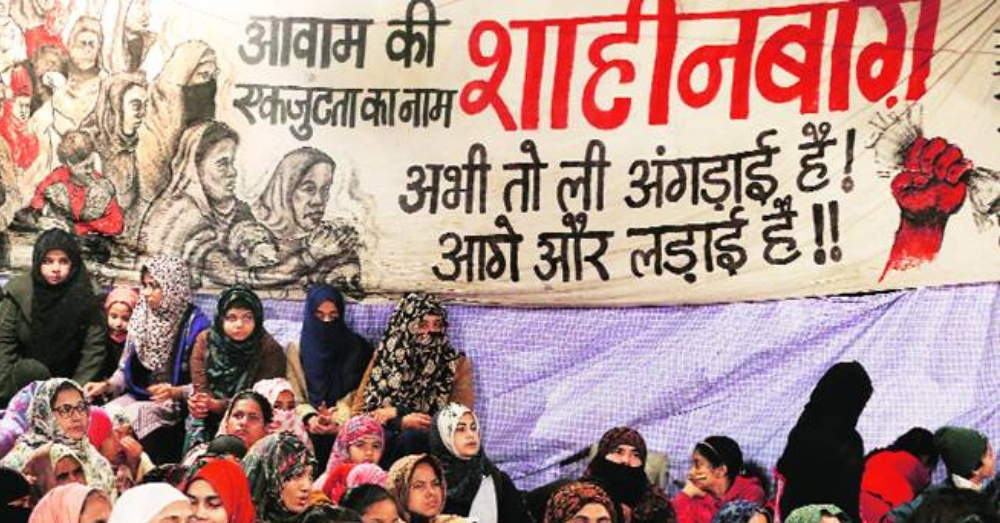 In the organic female assertion, as the “poor Muslim women” come out in public, challenging the hitherto established frame of ‘Hindu-Muslim male politics’ as they continue with their sit-in at Shaheen Bagh, and occupy public spaces that the author stresses upon, the Muslim men in these ghettos, who organise the protests, incur upon themselves capital losses, their businesses affected, shops closed, as they guard the protest sites and ensure that they don’t turn into sites for massacres by the Hindutva mobs or bear a crackdown by the police, stand ousted in NP Ashley’s ‘Man vs Women’ imagination.

The Hijab-clad Muslim women, a group of four of them, saved their friend Shaheen Abdullah from the police personnel in the widely circulated video from Jamia Millia Islamia, pointing fingers and shouting at them to go away as the latter look for an opportunity to bring him down, the world applauds, valorises these brave Muslim women, emancipated, courageous, fierce as they are, but forgets the position of Shaheen Abdulla in this ‘macro-male order’.

When a man, supposedly identified as Rambhakt Gopal, opens fire at the protesting Jamia students shouting “Ye lo azadi” (Here, take freedom) and a Kashmiri student, Shadab Najar, was injured and held by his female friend, emerged on the posters and pictures, as we capture the compassion, friendships, resistance and the state-sanctioned Hindutva terror, as Police stood with folded arms behind the shooter, those who pit men against women pass by the vulnerability of Shadab Najar, a Muslim, a Kashmiri, a student of Jamia Millia Islamia at that, as they celebrate his courage of confronting the Hindutva violence.

Also read: “Sorry For The Inconvenience, We Are Trying To Save Constitutional Values”

Shaheen Bagh, Jaffrabad, and the sit-ins by the Muslim women might be seen as the female assertion of the “poor Muslim women” by NP Ashley as he links these protests to the Partition and the violence that accompanied it and it ensued, arguing that the ghosts of Partition are carried on “the horse-cart of the CAA-NRC”, and in a bid to make people relive the partition, never did the state know that it has to counter the unexpected citizens, the women, who not only defy the set norms of Hindu-Muslim male politics but also undo the legacy of the Partition. But, does NP Ashley want to hear the Muslim women?

The author argues that Partition, like war and violence, has to be seen as a crisis of the Masculine craze for control as he questions the readers “In the voting to decide on the partition, who had the right to vote?“, “The landed gentry made up of upper caste, upper-class men from both Hindu and Muslim communities,” he continues.

That the voting rights were accorded as a privilege to the elites, subject to their social and economic class as the colonial state deemed the masses unfit to vote, that the women were accorded their rights in relation to their husbands and fathers and not as individuals unlike in Independent India is what, again, NP Ashley omits as he relentlessly insists upon the macro-male order and women victims of Hindu-Muslim politics.

Historically incorrect, as he positions the women as merely the ‘victims’ of this same male-order during the Partition, and assigns the responsibility of depriving them suffrage to men, he forgets to mention the women, the Burqa-clad Muslim women from the Muslim League and the women from the Congress who stood like a rock beside their male counterparts. The women who held some significant positions on both the sides, even if we restrict the partition to a war of feudal elites, notwithstanding the subaltern women and their roles in independence, because that’s what NP Ashley seems uninterested in. He is focused on voting rights.

The author leaves me wondering at how conveniently he has missed out on those thousands of women like Fatima Jinnah, Amjadi Bano Begum, Rana Liaqat Ali Khan, Begum Tasadduq Hussain, Begum Jahan Ara as also the women from the Congress who not only survived the Partition but also made it to the Constituent Assembly.

The macro-male order of NP Ashley supersedes the colonial space in which it operated.

The author stresses upon the impact of synergized subaltern women and students’ movements as they challenge the state and the prevailing Hindu-Muslim male politics but again “men cannot let that happen,” he writes.

Also read: “India’s Right-Wing Juggernaut Should Be Treated As A Threat For The Subcontinent”

In his attempt to pit the women against the men, NP Ashley obliterates the dynamics of the ghettos and these protest sites, the violence they invite, the very reason why these protest sites are being targeted. As in the oversimplified yet dehumanising man-woman reduction of the beleaguered Muslim minority of the author, there is no space for a Muslim except for the Muslim women being the subjects, objects, victims of patriarchy and Muslim men being a part to the “macro-male order.”

As the author continues with his rescuing these “poor Muslim women” from “violent male assertion” from “both sides”, harping on false equivalences between the perpetrators enjoying state impunity and those who defend themselves and in the process getting stigmatised, he doesn’t, for once, slightly point at the essentially hypermasculine Hindutva mobs and self-loathing assertion of masculinity upon the Muslim women. He puts the former at par with the Muslim men, again stereotyping Muslim masculinity and patriarchy.

The author argues that the initial attempts at provoking the protestors through violent actions and threats were handled by the women protestors before they finally succeeded at Jaffrabad, where it became a male scene all over again. The male scene and male violent assertion all through the oversimplified write up in the rather criminalising undertones of NP Ashley as he brings at par the males who resort to stone-pelting in the face of ghastly mobs barging into the houses shouting “Jai Sri Ram”, murdering people, throwing them alive into the fire, setting ablaze their houses, plundering their lifelong earnings, and devastating them emotionally, mentally, physically, and financially, and denying them even a peaceful death is no less dehumanising for these Muslim men whom he has criminalised for their right to survival. 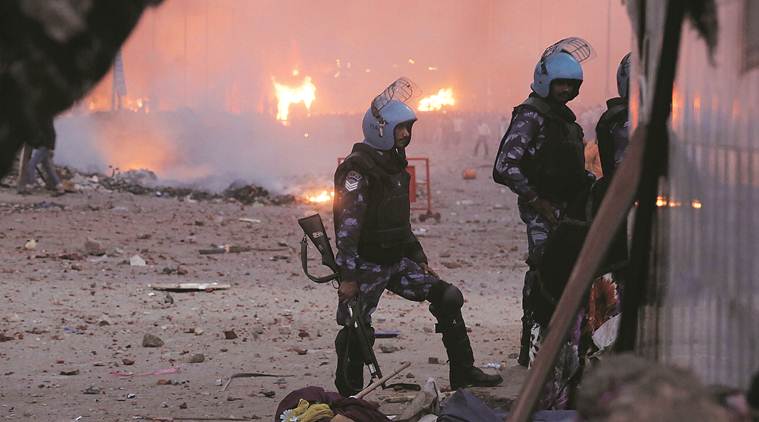 The impunity that these mobs enjoyed in the brazen pogrom wherein the Police stood as mute spectators, broke the cameras, letting a free hand to the murderous mobs and later on criminalised the Muslim men for their bare survival by arresting them has been passed off as “crimes of omission” by ‘another set of men’ by the author while the pogrom has been passed off as a “riot” in the title itself.

While NP Ashley reduces the Muslim women to subjects, objects, victims of macro-male order and at the same time “hopes that we all survive politically through these women”, a responsibility that he too bears as he rescues the Muslim women from drowning in the same of which he is very much a part of, while jumping into in the same ship as Hindutva in criminalising Muslim men, negating their oppression at the hands of the state and Hindutva terror, NP Ashley seems to have forgotten that for us all to survive politically, Muslim women are not the sole bearers of his political survival.

As NP Ashley seemingly fantasises the actualisation of promises of India through the Muslim women, I am compelled to question him on whether for once, did he ever think about these women marching time-and-again against the criminalisation of Muslim men through constitutional measures by the state such as Triple Talaq Bill or their marching against the state as Muslim men get killed in encounters? In the self-professed rescuing mission of the subjects, objects, victims that he calls the Muslim women from the macro-male order, where does the author stand as he brings the Muslim men, the subjects of Hindutva and state terror, at par with the Hindutva men?

Also read: The CAA Protests Made Me Realise We Can’t Afford To Be Silent Any More

Where do the Hindutva women who are jeering and cheering for the blood of Muslims, of men and women alike who are perpetrators in pogroms stand in Ashley’s frame of frivolous binaries?

Where do the Shaheen Abdullas, Shadab Najars, Faizans, Junaids, and thousands of those criminalised Muslim men stand in this “macro-male order“?

Where is the agency of Sadhvi Pragya, Sadhvi Prachi, Uma Bharati, Ragini Tiwari, and those Hindutva women who have been demonising the Muslim men and perceive them as a threat to the Hindu Rashtra?

NP Ashley wants us, the Muslim women, to save the country politically, reduces us to objects, subjects, victims and saves us from drowning in the macro-male order. But do I, as one of those women whom he appropriates, have the agency to question him on why is he so blinded to look at the stereotyping of the Muslim men that he gives into, turn the victims of a pogrom into rioters and refuses to acknowledge the State ever turned against these men?

Almas Saeed is an independent researcher.