Football has been the one constant in my life since I was eight years old. Despite being a girl, I got the same opportunities as my brother. Football camps and tournaments gave me ample chances to kick around whenever and wherever. Almost all of my fondest memories are on the field. Torn ligaments, bruises of all shades, and shapes, yet nothing has stopped me from playing.

But today, there’s something perilous coming in the way for players in my city, Delhi. Gone are the days when the bumps, bruises, aches and pains were a parent’s worst nightmare when their child stepped onto a field. Now, players of any age, especially the young ones, have to deal with the risk of life long lung and other organ diseases, only because they want to play their favourite sport.

With each passing year, the AQI in the National Capital deteriorates. Various measures are taken to keep it under control. People go all out to reduce exposure to the poison they’re forced to breathe every day: face masks, air purifiers, odd-even car schemes, indoor plants, and even smog towers have been added to this ever-growing list of band-aid solutions. School shutdowns and cancellation of sports days/events/activities are a regular feature on calendars.

With all of this going on, I often wonder: will young girls get the same chance to play sports the way I did, or will they be forced to choose a completely different path?

Just last year on Children’s Day, children all over the city were cooped up inside their homes, and those privileged enough sat in rooms with air purifiers, while others suffered high levels of indoor air pollution. In a city where we can count the number of clean air days on our fingers, I often think about what is happening to those in our city who play some sport every single day.

While I think refraining from playing on days when the air quality is poor is a smart move, what it means for Delhites is that there are very few days to play any outdoor sports at all, compromising physical well being, as well as mental health!

Things Just Got Much Worse For Sports Players In The Capital, Though!

Recently, the host cities for the FIFA U-17 women’s world cup were announced, and it came as quite a surprise to Football lovers in the capital city to not see Delhi featured on the list. Considering the FIFA U-17 men’s world cup did have a few matches in the city, it was assumed that the women’s matches would also happen here!

But it turns out; it’s not going to happen. Why? One reason, according to the FIFA head of youth Tournaments, Roberto Grassi, was—wait for it—air pollution.

“For example, pollution was one of the things we considered because of the health and safety of the teams and the players. So, we looked at other cities for that reason,” he said.

Well, this is undoubtedly a #RedCardForDelhi! Jokes apart, what does this mean for the city, youth, or even the country as a whole?

Let’s take a moment to understand this entirely; our capital city is so polluted that international organisations don’t want to use it as a venue for tournaments. While it’s the right decision, it is also a slap in the face. It’s shameful and something to think about, not just for the government but for every one of us.

Apart from the apparent positive impact sports tournaments can have—encouraging, inspiring, motivating young girls and boys to take up sports, foster a healthy spirit of competition, become a medium through which different cultures come together—they also play an incredibly important role in supporting businesses and boosting the local economy. 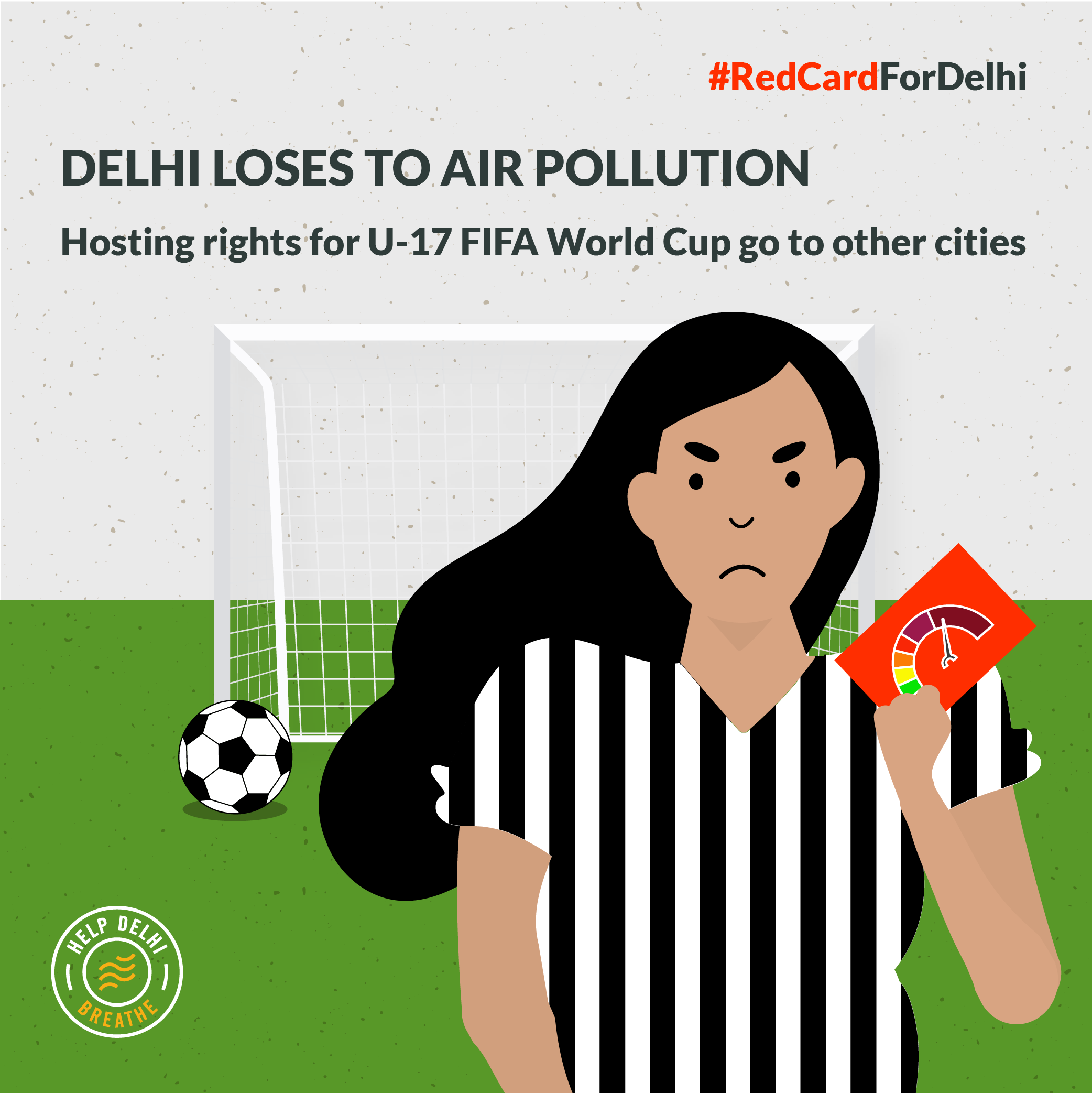 An interesting thing to note has been the list of five cities that have, in fact, been chosen to host the matches. Ahmedabad, Bhubaneshwar, Guwahati, Kolkata, and Navi Mumbai, apart from the fact that Football is pretty popular in most of these cities, an overarching similarity is that at one point or another, these cities have all had highly polluted air in the last year and just this week Navi Mumbai was the most polluted part of Mumbai with an AQI of 371, but haven’t been in the news for it as much as Delhi. Just last week, Guwahati was the most polluted city in the country, with an AQI between 300 and 400!

The 2017 FIFA U-17 men’s world cup in India saw 1,347,133 people attend, surpassing the record set by China in 1985. That’s A LOT of people attending a sporting event, but what does the future hold if cities cannot host such events?

The recently-elected Delhi government has made clean air a priority, and while that’s a promising move, what is it going to take to make real change? Maybe we can start by ensuring that air quality is being measured across the country. According to a report by Down To Earth, AQI monitors covered only 312 cities and towns in 2019. That is a mere 5% of the entire cities and towns in the country! If the air quality is not measured, what kind of steps are we even talking about?

As a female football player in the city, it has been disheartening to know that our pollution levels are keeping me from watching my favourite game live!

It makes me think of all the young boys and girls in the city who have lost out on this opportunity as well, maybe a life-changing opportunity that could have put them on a different path altogether. As we know, pollution has many visible and external threats, but there are so many missed chances and opportunities that need to be thought of and rephrased once again.

For now, all I can say is I’m sorry, I’m sorry to all the young kids in our city who have lost out on a great opportunity, and more so, sorry for the sport that has changed my life. Here’s to hoping that our air pollution woes finally start being addressed.