By Archana Gupta in Politics, Society

As a curious nine-year-old, I clearly remember looking at the front page of a national daily my father was reading post the Godhra riots. To a child, it was a representation of the grief survivors go through, and what the remains of hate and terror look like. With little understanding of the gravity of the incident, the collapsing twin towers from 9/11 was the other visual we talked about in school. It was only when I grew up that I was able to differentiate between riots and terrorist attacks. And I was aware enough to recognise those teary eyes and folded hands of one Qutub Ansari, who became the face of the riots. Over time, that front page left me thinking about violence and the loss of humanity.

These incidents did leave me in anguish. But other puzzles had started to germinate in my mind. How do we get the details about the casualties? How is the entire devastation managed afterward? What happens at the site?

My work gave me a chance to uncover this aspect when I was serving as a consultant to a State Government. The role included closely working with the District administration on an everyday basis. That’s when I got a chance to speak with a serving IAS officer who took care of the aftermath of Samjhauta Express Blast in 2007. I wanted to know what happened once they were informed about the blast. How were those 24 hours for the district administration? 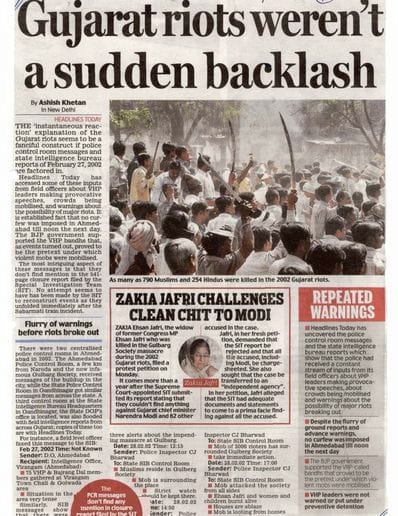 As soon as the blast was reported, all the ambulances and fire brigades were called at the blast site. The sight of three coaches in flame, people jumping off from emergency exits, and hands waving from the windows in attached coaches for help were beyond expression.

The train that connected people of a unified, bruised history was in ashes. Brutally injured victims were referred to AIIMS, New Delhi. I learned an important lesson from this: to prevent post-violence extremism and law and order breakdown in any incident, make sure the victims are provided with the best medical care in separate medical institutions.

In any such incident, one immediate requirement is manpower. The Sarpanchs of affected areas possess the ability to mobilise volunteers like no political entities. Volunteers from villages managed to shift passengers to better coaches and the train was set off to the destination. It prevented further mishap of law and order. The list of passengers was obtained through the Railways and a rough figure of survivors and victims was released.

Then came the most sensitive part: to take care of the dead bodies, keeping in mind religious sensitivities. Every minute hint of religious symbols was looked out for on the bodies after their loading and unloading. The entire process happened on a camera. The loading and unloading of bodies had to be done with dignity, And there was a sudden demand for coffins, which were made by local carpenters with plywood (pictures can be seen on the internet).

It was a matter of two countries, and a visa was required to travel to their respective countries. With an Operation Theatre converted as a makeshift mortuary, visas were issued to the citizens of Pakistan who were traveling in the train and their kin, so that they could facilitate the last rites. Bodies were given the needed honor with the help of religious leaders, and the coffins equally helped in maintaining and dispatching them.

The district administration made sure they stood for cremation until the process was complete. This opportunity was also used to polarise the city and to perpetuate hate politics by certain unwanted elements. There comes the field-connect of an administrator who can pacify the situation and promote harmony. Hence, it prevented another Godhra kind of backlash.

A lesser-known fact is that live explosives, in a box full of glass bottles, were found after the blasts had taken off in the coaches and were diffused. Recent acquittals by special court brought back this conversation I had with this officer. And what mostly goes unnoticed and unrecorded is the experience of these administrative officers who have to put their emotions under the cover to deal with such incidents: the way officers had to officiate picking up body parts to make them one, in order the minimise the pain of the dependents.

This conversation brings me to the picture that wasn’t covered in the case of Qutub Ansari, and the trauma he would have gone through. The treacherous series of events was more than facts reported in news headlines and what a nine years old could understand. Having heard of this first-person account and the losses irrespective of faith, I wonder where we are heading to when I remember what an auto-rickshaw driver told me at Naroda Patiya (Ahmedabad):

“We are Hindus, and we do not indulge in violence. But you know what, the grains we eat are different! Whatever they eat is different from what we eat. For they eat meat, their brains operate in a violent, non-vegetarian manner. We are vegetarians and function like one.”

Also read: A Bunch Of Thoughts On The Bizarre Call For A Hindu Rashtra In A Secular India