Through The Prisoner’s Prism: A Review of “Tinka Tinka Madhya Pradesh”

By Simran Rawat in Books

In this book, Dr Vartika Nanda uses colours and words to paint a picture of prisons. The book elaborates on the experiences of fourteen prisoners, four children and a watchman to build a compelling narrative of life inside Madhya Pradesh’s prisons. This coffee table book is the first such assembly of creations.  It details extensively, the day to day life in prison and it’s every aspect. 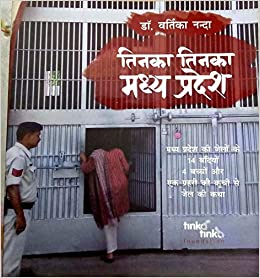 This ranges from the entry gates and searches to the kitchen and prayer time; offering novel insight into a section of society that we often overlook. Tinka Tinka is a unique series to bring change in the lives of jail inmates.

Tinka Tinka Dasna is the first-ever reporting of its kind on life in jail, dealing with the lives of those who are on life imprisonment. Tinka Tinka Tihar, co-authored by Dr.Nanda with Vimlaa Mehra, is the first collection of poems written by selected women inmates of Tihar Jail.

The book begins with an account of a fallen tree trunk on prison premises.

Instead of removing it, the prison converted it into a beautiful art installation, truly a sight for sore eyes. It is this kind of resurgence and repurposing that this book chronicles. It stands as a testament to the tenacity of the human spirit and signals the rekindling of joy in jails.

The book is divided into nine sections, each adding its piece into the kaleidoscope of experiences that this book enshrines. It is an amalgamation of Dr Nanda’s journey and the lives of those associated with Madhya Pradesh’s prisons.

This section explains how this story is being told through the paintbrush and pen of the aforementioned people. “All the men are on life terms, all the women are undertrials, while the children are silently suffering the brunt of their parents’ mistakes. The guard sees the prisoners everyday closely and is witness to the mental prison outside the jail and social prison inside the jail.”

Various themes are explored in this section. The metaphorical distance between the two gates of the prison stands for the distance that develops between the prisoners and their old identities as well as their families. A particularly poignant paragraph describes how all material of the outside world is left behind and only one’s shadow remains with them. The day to day drudgery of prison is described in detail.

“Everyone’s work inside the prison is duly decided. There are no clocks inside the barracks and one iron gong is used to tell the time. The food has no sweetness, only the saltiness of waiting.” Through poetic lines like this, Dr Nanda illustrates how jails are bound not by choice but by rules, leaving no room for independence or individuality.

Herein, it is described how Kanha emporium was established in 2016. Items made in all jails of Madhya Pradesh are sold through this emporium. In a year, items worth nearly 2.75 lakhs were sold. Through this, Dr Nanda makes the point that prisons can also have an identity beyond crime. “Prisons profess to finish crime but whether they can change the character and the nature of the crime isn’t set in stone. They teach one that everything is impermanent and teach everything anew.”

No cook or barber or gardener or cobbler comes to the prison from outside. Furniture, files, purse, vessels, etc. are all made on prison premises. Other activities include computer training, printing, making diyas, and growing vegetables. The bit about open jails was very interesting and uncovered a side to prison that not many know of. “In the open jail, the walls are small and the sky is big. It is a milestone in Madhya Pradesh’s jails with huge possibilities.” Prisoners undergoing life terms are allowed to go out, work and come back in the evenings. Their families are allowed to stay with them in the open jails. This experiment is setting an example of joining jails with society, instead of strict segregation. Such an initiative is a remarkable step towards rehabilitation and reform, not just punishment in prisons.

Children Who Live In Prison

Herein, Dr Nanda tells the touching tale of children born in prisons, and of their lost childhood and innocence. “The kids are rendered criminals without committing a crime. They are born in the shadow of the imprisonment of a near and dear one. The first chapter of their life is written in jail. Their address is the jail and they have nobody to take care of them, all their relations are made within the four walls of prison only.” There are about 1800 kids in jails across the country. This section truly forces one to think of the plight of these children and of the parents, who have no option but to see their child grow up behind bars as well.

Jails Write: The Brilliance Of The Pen In Jail

Touching upon how prisons bring loneliness and give time for introspection, this section talks of why there has been a tradition of writing in jails across the world. One sees several examples of freedom fighters who wrote in jails like Subhadra Kumari Chauhan, Pandit Makhan Lal Chaturvedi, Kaka Kalelkar and Bhavani Prasad Mishra herein.

Historical Jails Of Madhya Pradesh: Bars Imbibing The Past

Dr Nanda traces the history and evolution of prisons in Madhya Pradesh like Jabalpur, Gwalior, Baitul, Ujjain, and Indore. It gives the reader a greater insight and context of the prison system in India.

Here, one gets a rare glimpse into three desires and three regrets of the prisoners. It is an unprecedented look into their mind. For instance, Jyoti writes that she regrets not being able to be a mother to her kids and the fact that her husband committed suicide. She hopes for a bright future for kids, desires to spend time with her family and hopes she doesn’t repeat the mistakes she made unknowingly. This chapter humanizes the prisoners as compared to typical media portrayals and lets one see them for the real individuals they are.

Pen, Paintbrush And Artist: Artists Who Wrote History Behind Bars

Eight prisoners from Bhopal, two from Ujjain, one from Indore and three from Gwalior have made the drawings in this book, as have four children and a guard. Their names and descriptions are enshrined within. Remarkably, this is the first time that men, women, children and even a guard participated in such an exercise through this book.

The Coming Together Of The Book

Herein, Dr Nanda speaks of her struggles and of those who made this book possible. Apart from the prisoners, she makes a fair point that for many of the employees, even their life just revolves around the prison. She talks of how the prisoners are incredibly talented. Her journey is commendable as she has struggled a lot to make this endeavour successful, working alone without a team. Some of the hurdles she faced included the reticence of the female prisoners, many of whom had given up on life entirely. She had to implore women again and again before they agreed to participate.

From Tihar To Bhopal

The last section helps one understand the journey and the people who helped Tinka Tinka travel from Tihar to Madhya Pradesh. One learns more about the author and her foundation’s noteworthy work.

The book leaves one with the sense of having read something impactful, engaging and innovative. An exercise of this sort has never been attempted before. It is a window into another world, one that the general populace needs to glance inside much more often.

Also read: Inside An Indian Prison, I Met Talented Inmates And Inspiring Jailors