Since 2014, we have celebrated March 3 as World Wildlife Day. On 20 December 2013, during its 68th session, the United Nations General Assembly decided to observe March 03 as the day of the adoption the Convention on International Trade in Endangered Species of Wild Fauna And Flora (CITES), as World Wildlife Day to celebrate and raise awareness about world’s wild fauna and flora and recognize the importance of CITES.

CITES ensures that international trade does not threaten the survival of species. CITES (also known as the Washington Convention) is a multilateral treaty to protect endangered plants and animals. It was drafted as a result of a resolution adopted in 1963 at a meeting of members of the International Union for Conservation of Nature(IUCN). The CITES was signed in Washington D.C. on March 3, 1973, and entered into force on July 1 1975.

CITES remains one of the world’s most powerful tools for biodiversity conservation through the regulation of trade in wild fauna and flora.

The secretariat of the CITES in collaboration with other relevant United Nations organisations facilitates the implementation of the ‘World Wildlife Day’.  CITES regulates international trade of over 35,000 species of plants and animals, including their products and derivatives, ensuring their survival in the wild with benefits for the livelihoods of local people and the global environment.

According to UNEP’s Millennium Ecosystem Assessment, “Over the past 50 years, humans have changed ecosystems more rapidly and extensively than in any comparable period of time in human history, largely to meet rapidly growing demands for food, fresh-water, timber, fiber, and fuel. This has resulted in a substantial and largely irreversible loss in the diversity of life on Earth.”

Wildlife crime is a major threat to wildlife. Illicit poaching and trafficking of wildlife continue to thwart conservation efforts, with nearly 7,000 species of animals and plants reported in illegal trade involving 120 countries. According to the WWF, it is the fifth most profitable illicit trade in the world, estimated at more than $10 billion annually. The International Consortium On Combating Wildlife Crime (ICCWC) formed a powerful alliance to fight wildlife crime effectively. ICCWC is composed of five international organisations- CITES, INTERPOL, UNODC, World Bank and World Customs Organisation.

Forests cover nearly 31% of our planet’s land area. Forests are home to more than 80% of all terrestrial species of animals, plants and insects. However, the earth’s biodiversity is declining faster than at any other time in human history. An estimated 20% of the Earth’s land area was said to have degraded between 2000 and 2015.

“Biodiversity delivers multiple services. For instance, insects and other pollen-carriers are estimated to be worth more than US$200 billion per year to the global food economy. Three-quarters of the top-ranking global prescription drugs contain components derived from plant extracts. Natural disasters caused by humans and climate change cost the world more than US$300 billion per year. Deforestation and forest degradation results in loss of habitat for all species, a decrease in freshwater quality, an increase in soil erosion, land degradation and higher emissions of carbon into the atmosphere. In short, not taking action on forests impacts both the health of the planet and our communities.”

Also read: The Case For An ‘Environment Cess’ To Clean Up Our Ecological Mess

“The theme of World Wildlife Day 2020, “Sustaining All Life On Earth”, encompasses all wild animal and plant species as a component of biodiversity, as well as the livelihoods of people. Sustaining all Life on Earth also includes use of natural resources in support of the Sustainable Development Goals- SDG 1- No Poverty, SDG 12- Ensure sustainable production and consumption patterns, SDG 14- Life Below Water and SDG 15- Life on Land,” according to the UN

However, the overexploitation of the species and natural resources and unsustainable human activities are imperilling the world’s biodiversity. Nearly a quarter of all species are presently at risk of extinction in the near future.

World Wildlife Day 2020 provides a unique opportunity to deliver transformative progress for the conservation and sustainable use of the species of wild animals and plants.

According to UN Nature Rescue Plan (January 2020), the need of the hour is to protect 30% of the Earth’s surface across land and sea by 2030 to ensure the viability of ecosystems essential to biodiversity and human wellbeing. Human activities—how we feed, fuel, and finance our lives—have adverse effects on wildlife, wild places, and natural resources, which we need to survive.

The scientists declared the freshwater Chinese paddlefish—which thrived for 200 million years—extinct, in the first week of January 2020.  Many wild species in India are facing anthropogenic impacts like wildlife crime and habitat loss and are on the verge of extinction.

According to WWF’s ‘Living Planet Report 2018‘, on average, there is a 60% decline in the size of populations of mammals, birds, fish, reptiles, and amphibians in just over 40 years. The top threats to species are human activities, habitat loss and degradation, and the excessive use of wildlife such as overfishing and overhunting. The report presents a dark picture of the impact of human activity on the world’s wildlife, forests, oceans, rivers, and climate.

Also read: Why Does Inclusive Environmental Justice Still Seem Like A Far-Fetched Dream In India?

We protect wildlife for many reasons. Wildlife has an intrinsic value and contributes to the ecological, genetic, social, economic, scientific, educational, cultural, recreational and aesthetic aspects of sustainable development and human well-being. It is a source of inspiration. It nurtures a sense of wonder. It is integral to the balance of nature. 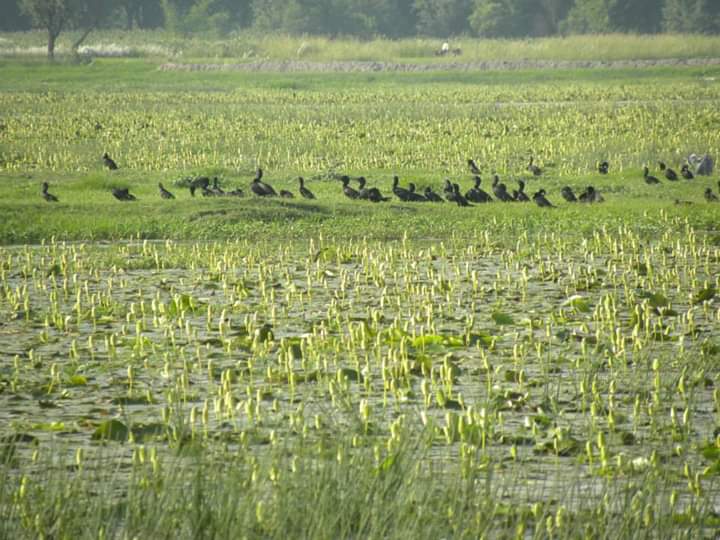 Note: Dr Mamta Shukla is the co-author of this article.; she is a Plant Pathologist.

This article has been published by Hindustan Times Lucknow edition on March 04, 2020, in the XPRESSION column.