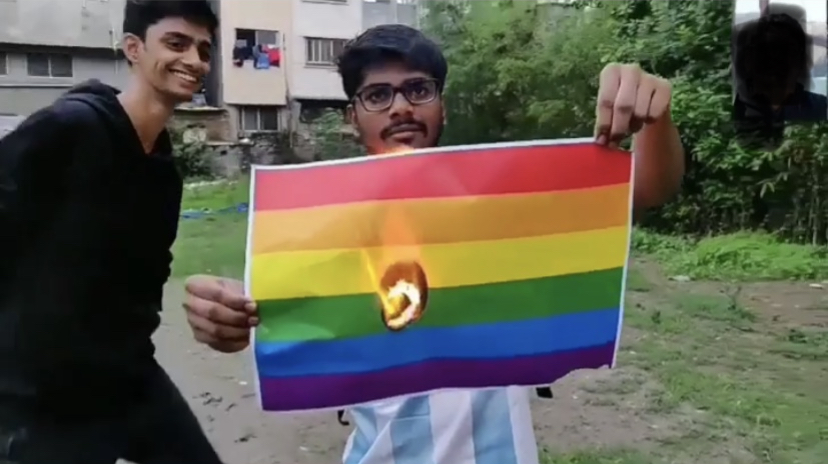 Neeraj Pedhekar, an MBBS Student of BJ Government Medical College (BJGMC), Pune had uploaded a video on Instagram in which he can be seen committing a Hate Crime against the LGBTQIA+ Community along with another individual identified as Prachit Sonsale. In the video, Neeraj and Prachit can be seen burning a Rainbow Flag, also known as the Pride Flag, which represents the LGBTQIA+ community. Neeraj made derogatory comments against the community, made calls for violence against the community and asked community members to kill themselves, while he set the flag on fire and posed with it along with Prachit. The video has been recorded by their accomplice, identified as Anant Abhyankar.

Several LGBTQIA+ students of BJGMC anonymously flagged this incident to an online Queer Welfare and Awareness platform – “Yes, We Exist” and expressed that they fear to be around Neeraj on campus due to his violent act. On behalf of the students, a complaint has been filed with Dr. Ajay S. Chandanwale, Dean of the institution, who heads the Anti-Ragging Committee. Recommendations have been made to Dr. Chandanwale to take necessary corrective action against Neeraj Pedhekar and set a strong precedence in order to ensure that no such acts are committed by the students in future. Additionally, recommendations have been made to Dr. Chandanwale to implement a sensitisation program for all students and teaching as well as non-teaching staff in order to make the institution campus safe for LGBTQIA+ students.

After receiving backlash from multiple users on Instagram, Neeraj posted an apology message through a story on Instagram however in the very next story, he continues to speak in a demeaning way about the LGBTQIA+ community.

Reviewing the incident, Duggirala Subash, a queer Law student said, “The sections under 153A and 505 IPC deal with promoting enmity between different communities, causing public mischief, inciting groups to commit violence against other communities.” He further added, “Any person who does or acts against the interest of the LGBTQ community shall be punished with imprisonment upto three years and a fine.”

Hate crimes against the LGBTQIA+ community in India are not uncommon. Recently, posters were put up in parts of Hyderabad claiming that coronavirus can be contracted if one speaks to a transgender person. In 2019, several transgender persons, across India were lynched by mobs who believed a hoax that transgender persons were kidnapping children.

In 2018, the Supreme Court of India read down Section 377 of the IPC and directed the Government to publicise the verdict through a national level sensitisation campaign using various channels such as Radio, Print, Television, etc. However, the BJP Government has not yet launched the campaign nor has it taken any other steps to reduce the stigma in the society against the LGBTQIA+ community.