The freedom given to media is the litmus test of democracy in a country. India is the largest democracy in the world, but the freedom granted to journalists shows a different picture. India’s rank in media freedom index has fallen from 140 in 2019 to 142 in 2020.

Reporters Without Border, who release the Media Freedom Index each year, has heavily condemned the Indian government for curbing press freedom in the country. The report said, “There have been constant press freedom violations, including police violence against journalists, ambushes by political activists, and reprisals instigated by criminal groups or corrupt local officials.”

The report further said, “Ever since the general elections in the spring of 2019, won overwhelmingly by Prime Minister Narendra Modi’s Bharatiya Janata Party, pressure on the media to toe the Hindu nationalist government’s line has increased.”

In a recent case, a photojournalist from Kashmir was charged with UAPA for allegedly “glorifying antinational activities.”  The RWB has condemned the Indian Government, “Reporters without Borders (RSF) calls for the immediate and unconditional withdrawal of the flimsy charges brought against Masrat Zahra.”

The media never has a golden era. However, over the years, India’s rank in media freedom rank has significantly deteriorated.

Lastly, it is the high time the Modi-led government introspect and made attempts to establish free media in the country. 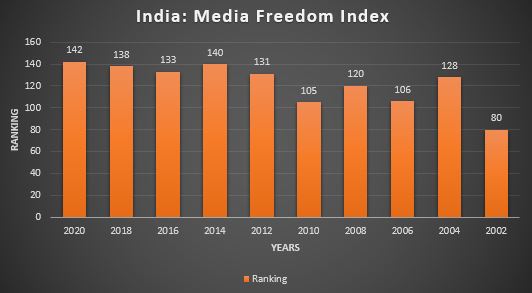 Innocent Until Proven Guilty? What About Indian Prisons

What Could Be The BJP’s Motive Behind The Personal Data Protection Bill?

From Textbooks To TV: India Is Going Queer And We’re Here For It!