By S Bhanu Prasad in News

Also, the NYT in its short introduction on the front page said that “the 1,000 people here reflect just 1% of the toll. None were mere numbers.” which was completely covered in just text. It dedicated 3 pages to the victims of the pandemic.

Picture: Front Page Of The NYT 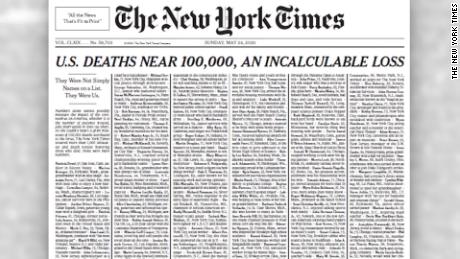 The newspaper has given simple information on the front page, with the names of people who succumbed to the virus, died, their lives and deaths. Some of the famous people who died of the virus are:

In highlighting the grim US death toll from the COVID-19 pandemic, it signalled a powerful message to the general public across the world and to the White House, where President Trump desperately wants to open the world’s powerful capitalist country.

This project publication was headed by Simone Landon and her associates in the NYT. The information of the deceased had been taken from nearly 1, 00,000 obituaries around the US, with a simple list of names and personal details.

Reactions To The NYT’s Front Page

This is jarring — and a heartbreaking reminder that the death toll we see in the news is so much more than just a statistic. Every single one marks a future cut short and a family and community that will never be the same. @DrBiden and I are keeping them all in our hearts. https://t.co/4yJzsRdB6l

“They were not simply names on a list. They were us.” https://t.co/8x7enjpi4B

Interestingly, one of the Twitter users from India, referring to the NYT Sunday front-page, commented: “Meanwhile can Indian media finally look at the humans beyond ‘17 migrants killed’ etc. Human stories capture human imagination and propel us to feel and act much more than numbers – which we become numb to after a while.”