My RTI Revealed How 60% Of The Nirbhaya Fund Remains Unutilised

The answer, as you can see bellow, shocked and enraged me as I believe it to be an insult to the anguish of the country over the rape and murder of Nirbhaya and hundreds of other girls and women. 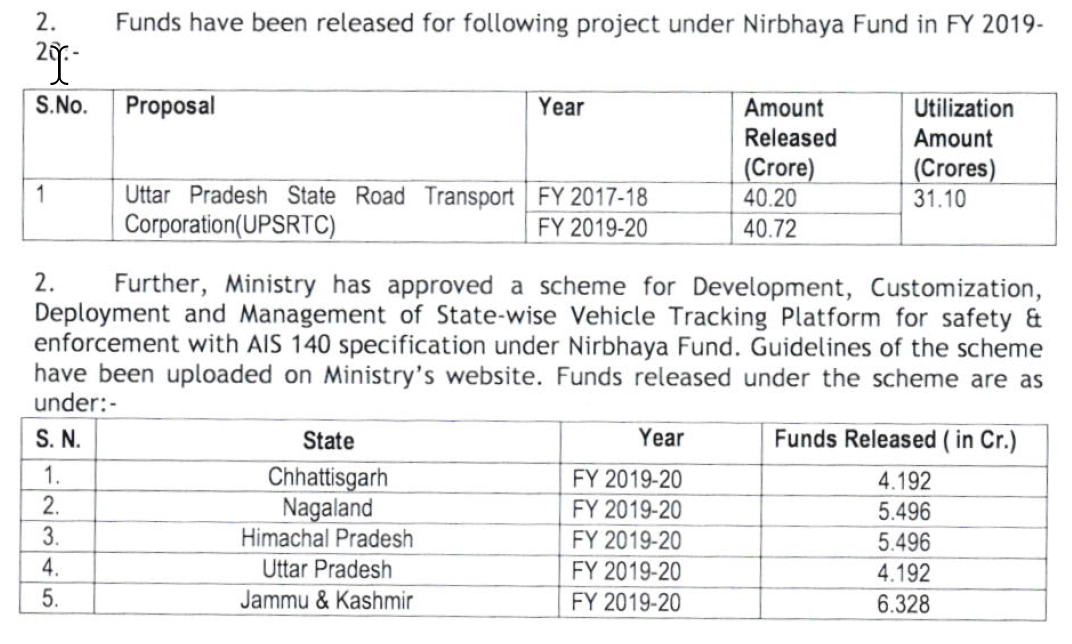 The first thing the RTI says is “funds have been released for the following project under Nirbhaya Fund in FY 20’19-20″. (emphasis on the word project). Rs 80.82 crores have been spent on a proposal titled ‘Uttar Pradesh State Road Transport Corporation (UPSRTC)’. How will this proposal help prevent rapes is anyone’s guess. I looked for the word Nirbhaya on the corporation’s official site.  The search result showed zero results. I then looked for the word ‘women’. It returned 7 results of pages related to directory information, 1090 helpline, and ticket concession.

For the sake of argument, if we accept that the money was allocated for a worthy proposal to improve women’s safety, I am not optimistic about the outcome because only Rs 31 crores of the Rs 80.82 crores have been used. The rest of the 49 crores remain utilized in some bank account collecting dust.

Ministry claims they have approved a scheme for Development, Customization, Deployment, and Management of State-wise Vehicle Tracking platform for safety and enforcement with AIS 140 specification under Nirbhaya Fund in Jammu and Kashmir, Chhattisgarh, Nagaland, Himachal Pradesh, and UP. But the total amount released for this project is just around 26 crores.

Thus, around 100 crores are yet to be spent on improving woman safety. Fortunately for the government, the citizens cannot sue the government for the non-utilization of these funds even though many more girls suffer a similar fate as Nirbhaya due to lack of safety and surveillance equipment which could have prevented these crimes.

Also read: As Women’s Safety Becomes A Severe Issue Amid Lockdown, The UN Calls It ‘Shadow Pandemic’
You must be logged in to comment.

Criminalising Marital Rape Is The Solution, Not ‘Marrying The Perpetrator’!

Has The Indian Judiciary Lived Upto The Expectations Of Its Women Citizens?

In India, Why Do We ALWAYS Find Excuses To Not Criminalise Marital Rape?