By Meghna Deshmukh in #CoronaWatch, News

On Tuesday, yoga guru Baba Ramdev claimed to have found the ‘cure’ for COVID-19. Patanjali’s Coronil and Swasari package was said to allegedly cure the virus in only seven days and was said to be available in shops soon.

In response to Baba Ramdev’s claims, the Union government had, yesterday, asked Patanjali to not advertise the medicines until they are examined. It has asked Patanjali to submit a report on their findings and asked them not to sell the products. 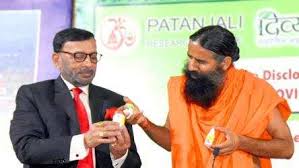 On Union Minister for AYUSH Shripad Naik stated that the medicines will only be up for sale once it tests well with the government’s rules and regulations. “It’s a good thing that Baba Ramdev has given a new medicine to the country but as per rule, it has to come to AYUSH ministry first,” the minister stated.

The AYUSH ministry has asked the company to prepare a report with details like the composition of the medicine, reports of hospitals where they had conducted their research, result of the research, whether the company had clearance from Indian Ethics Committee and whether it had registered for the clinical trials.

According to Ramdev, the medicine has had “100% per cent favourable results” and was allegedly tested on 280 patients in cities such as Delhi and Ahmedabad. It was a collaboration with privately-owned National Insitute of Medical Science (NIMS) in Jaipur.

Meanwhile, many countries are still working to find the vaccine for the pandemic. India is currently the fourth-worst hit country with a new high spike in the number of active cases every day.

Also read:  Unprecedented CSR Support To PM-CARES, But Is It All Good News?

How Our Teaching Transformed In The Pandemic