By Manish M. Suvarna in Latest

Mira-Bhayandar’s one of the most popular ganeshotsav mandal ‘Sukh Karta Mirta Mandal’ (Shiv Sena Gallicha Raja) has decided to cancel its biggest Aagman Sohala (welcoming ceremony of lord ganesha) and instead bring a three-feet-tall eco-friendly ganesh idol in the light of the coronavirus outbreak in the country.

The mandal’s Chairman Dhanesh Jaiswal and Ravi Sharma has decided to make the ganesh idol with red soil instead of plaster of paris. However, the height of the idol will also be reduced to three feet as compared to 15-18 foot earlier.

“We will do bappa’s visrajan in mandap itself in to a man-made pond and distribute the soil to the members of the mandal and nearby people,” Ravi Sharma said.

During the 11 days of ganpati, the members of the mandal will take special care by allowing only those people who are wearing a mask and have sanitised themselves at the entrance. 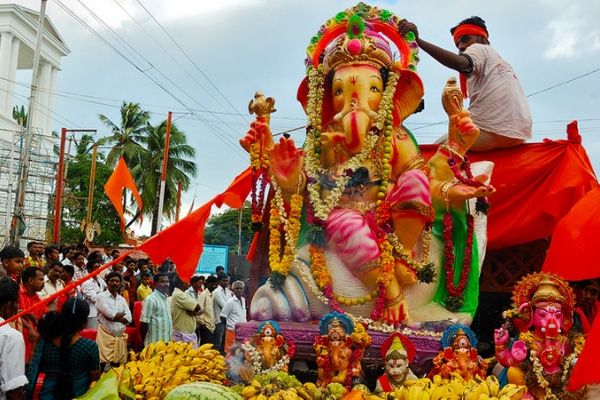 The mandal has also allowed gathering of people during the aart‘ with social distancing norms and proper sanitisation.

The organisers have to taken this step to prevent additional stress on Mira-bhayandar Municipal Corporation and Bhayandar police, who are busy in the pandemic containment operation.

“The Aagman Sohala will give them an additional stress in maintaining law and order during fedtival,” the Chairman said.

Devotees attend the Aagam Sohla of ‘Shiv Sena Gullicha Raja’ in thousands. Sonu-Monu beats, one of the best band in Mumbai, comes to play their band with lot of lighting by Adarsh Sound and Light, 101 Nashik dhol and standing DJ are the attraction mandal present in front of devotees, which attracts thousands of people to gather and dance.

The organisers has decided to follow the government’s instructions to avoid crowding and hence the Aagman ceremony has been cancelled. Ganeshotsav Mandal and devotees are curious about how the festival will be celebrated this year due to the threat of an outbreak.

The ganeshotsav will also be celebrated in a simple manner for which the mandal will cut down spending on lavish decorations and lighting.

Also read: Answer 8 Questions To Find Out How Safe You Are From COVID-19!
You must be logged in to comment.

Is Bollywood Nearing Its End Game?

Humans Vs Global Warming: Who Will Win?