What’s In A Name? Here’s What Happened When Manduadih Station Was Renamed Banaras

By shakeel ahmad in Latest, Society

The most recent research in the field of human vision is the bionic eye in this modern day of computer science. Yet, What is in a name? It is definitely the remarkable reference with one’s identity and individuality. It is the one way we can get someone’s instant attention. It is also a sign of politeness and a way of recognising anything whether it is animate or inanimate.

However, the Bard of Avon William Shakespeare seemed to have been inattentive of the computer age, that’s why he wrote, “That which we call a rose / By any other name would smell as sweet.“. He would have been thinking of the quality of rose only. He momentarily forgot the intrinsic value of the flower’s physical name.

Like another noun, the year-old name of one station of Eastern Railway was recently changed from Manduadih to Banaras. It was even painted on a cemented pillar board usually put on the railway platform. This was done to let the passenger know of the changed name. But soon, the older name appeared there. It was clarified that the old name code, MUV, is still showing in the railway’s system, and it is yet to be changed. 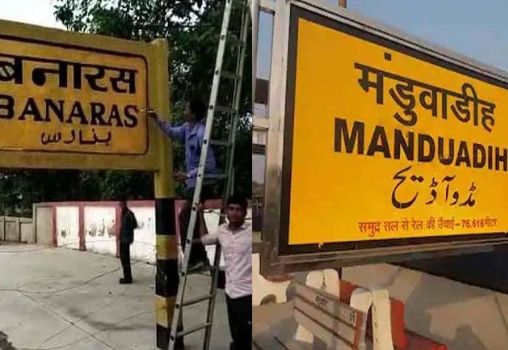 Therefore, the old name will stay till the new code, BSBS, for the new name isn’t secured in the memory of the computer. The passengers were also quite confused with the code when trying to get a confirmed reservation. In view of the inconvenience, the Railways authorities decided to continue with the former name, so long as the situation does not devolve further.

This example showed how important the name of a place, person or thing is. It cannot be forsaken in any case. What was known by the name once, continues to be known till the last. It is quite troublesome to bring change in the name just for political reasons.

Also read: Hubbali-Ankola Railway Project: Is It Worth Destroying The Western Ghats?
You must be logged in to comment.