According to the 2011 census, 51 million people of our country are Bhojpuri speakers, and predominantly, residents of eastern Uttar Pradesh, western Bihar and Jharkhand. Due to rapid migration of these people to find employment, a big chunk of Bhojpuriya people can be found in metro cities including Delhi, Kolkata, Mumbai and Chennai. They are unevenly distributed throughout the rest of the country.

The music that most popularly caters to this population is Bhojpuri filmy songs or albums. One click on YouTube with the keywords Bhojpuri songs, and it’ll open up a large number of music videos that are overtly sexual in nature. Gone are the days of classic songs such as “Gori tera gaon”, “Jug jug su jiya” etc. The “Nadiya ke paar” soundtrack stills hold a place in the heart of every Bhojpuriya person.

However, most of the songs these days are either about sexual pleasure or women’s body parts. Some people may say that expressing sexuality should not be an issue as there are many sexual songs in other cultures. This seems correct, but the problem here is: what if 90% of the songs produced in a year only talk about sex? 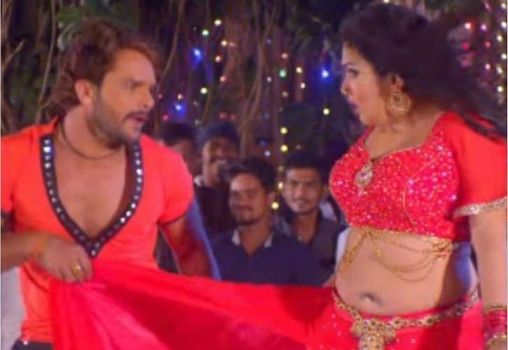 The worst thing is that you can see people dancing to these songs on religious festivals like Navratri and Diwali. Or you may find a five-year-old boy singing “Hamra ganna ka ras tora dhori me sahi sahi jata ki na” (want to know the meaning? – Google it, you will be amazed).

The question arises here: why are these singers producing such type of songs? And the answer is that people listen to these songs because they have no other option. A good percentage of the songs produced are devotional in nature. One can can hear these songs in the months of saavan (monsoon season) or during Dussehra and Diwali.

With the advent of high speed internet, Bhojpuri music videos are gaining millions of views every day, promoting the misogynistic and objectifying songs to millions in this country.

Also read: Take This Quiz To Find Out If You Know How Sexist Bollywood Is!
You must be logged in to comment.

Have ‘Indian’ Artforms Been Appropriated By Brahminism To Keep Out Dalits?