When The Global Media Is Worried About The Economy, What Is Indian Media Doing?

By Prashant Srivastava in Business and Economy, Media

Turn on any news channel, which isn’t Indian, and we will find them talking about one thing in common: The economy, the economic crisis, the crashing global capital and more related to these. However, our media is all about drugs in Bollywood and how they roll their weed, and most precisely whom they roll it with!

This article is going to focus on the ‘grey area’ in which Indian media actually lost its soul. The most important thing that the media totally side-eyed is our falling economy. According to the World Press Freedom Index 2020, India stands at the 142nd position, with a score of 31.25. We can’t blame the pandemic for this because it is the one industry which was functioning on its full stream and strength. We slipped by two positions, from 140th last year to 142.

Now, let’s take a moment and psychoanalyse this. Indians are currently facing a downsizing of the media both in quality and content. When, in 1930, the first-ever film industry was established, we admired the spice in our stories and slowly that became our culture and it transcended to our news channels as well. With the boom of the IT sector in India, the crowding of news channels increased hence which lead to a bigger war ground. This was no war of content or news, but this was pure business. 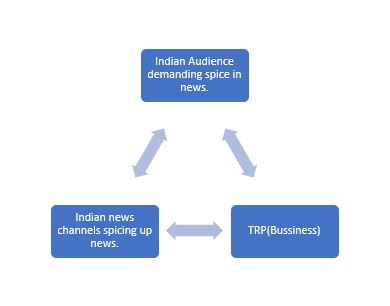 To make their viewer count reach seven-plus figures, news channels have started taking a creative turn to boot polish silver screen. Now this species is also known as paparazzi. Well, feeding a snake doesn’t make you it’s owner, and that what is happening with celebs now.

If we look back from here we would find that somewhere we are to be blamed as well. Now if we think we are stuck in a deadlock that our views are corrupted by the hoodwinks and same are dependent on our thirst of peeping into page 3 glamour.

Why is the Indian media quiet about the current state of the economy?

The biggest questions have the simplest answers and that is because No one is asking! It’s on us now to take it seriously or let it be. Because ten years from now it’s us will suffer. Its time we try to look at the bigger picture and dare to ask questions. Isn’t it all what is journalism about? TO QUESTION!

Quick Byte: The Cost Of The Annoying Covid Caller Tune