Bihar’s Last Phase Campaigning Was More Volatile Than The Rest

Bihar’s Chief Minister Nitish Kumar in the last phase of electioneering sought votes saying this election was his “last” during his speech at a rally on Thursday. Was it his conclusive emotional line to jiggle electorates’ soul? Or, he spoke it in a stroke of gameness? Whatever it may be, he was supposed to be in a sombre mood as he also messaged that no one was going to be pushed out of the country.

If he has hinted at procuring votes from the major inhabitants in Seemanchal, he left the campaigning with filling the gap caused earlier owing to his argument over 8-9 children blitz. However, it was said to be his ‘Brahmastra.’ But the young RJD politician did not react and poured soil on the matter by saying him a father-like figure. This equilibrium was not seen in the expression of a Congress Party MLA who put “m” in place of “o” in the first name of AIMIM leader who wants to seek his party’s banner in Seemanchal area.

(MLA Abdul Jalil Mastan said, “AIMIM’s Mr Owaisi has come here to graze. He lands a helicopter in all our Panchayats. He splurges money and gives speeches. Here’s here for grazing but it’s not a pasture. I’ll break his teeth and send him to Hyderabad”) 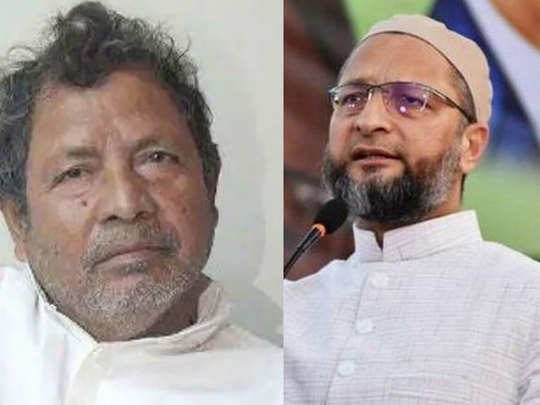 It was sarcastic every inch. Even Rahul Gandhi would not mumble that sharp acerbic language. Was it a fear of loss in the electoral fight on Amour seat? The Congress at all costs wants to capture the constituency again and that’s why Abdul Jalil Mastan has been fielded. Though AIMIM had done better in the last poll there. Aristotle used the term social animal for the man but Congress party’s politician brings the Hindi word ‘mwaisi‘ for Owaisi and chided him for landing the ‘copter at a Gram Panchayat. Was Asaddudin Owaisi present for grazing there? It all appeared desperation of the Congress which now finds another political party to dent in its vote bank.