“A friend in need is a friend indeed”, goes the saying, and this was proved correct by a loyal parrot named Eric who by dint of its concentrated brain saved its owner Anton Nguyen from the leaping flames of the fire. The parrot prompted its owner by waking him up during a house fire in Australia. The pet alerted about the big peril by repeatedly shrieking, “Anton! Anton!” as was reported. It has been proved now that animals, birds and even human beings are equally trustworthy.

We usually come across the delay in the arrival of the fire tenders in our great country. In such a condition necessity of such kind of birds is deeply felt to do something helpful. The raging fire on the spot takes whatever comes into grip directly, but to douse the raging fire such birds could help a lot by shouting full throat as has been reported about Eric. 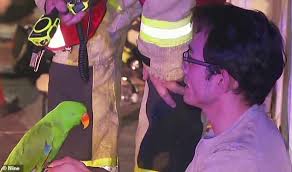 Anton smelt smoke badly and looked at the leaping flames, he quickly grabbed his feathered friend and escaped from the building at Kangaroo Point, Brisbane, Australia. He gratefully spoke of his pet for raising the warning buzzer and saving him from the rising blaze during the night hours recently.

He later said, “Eric my parrot, he started to cry out, so I woke up from slumber, and I sniffed a bit of smoke”. “I showed enough strength to grab Eric, opened the door and looked to the back of the house and saw some flames. And so I grabbed my bag and took off and bolted downstairs,” he added.

We need such pets that not only copy our voice but also save us from impending danger. None could deny that animals or birds are always faithful to their immediate bosses. No sooner did the pets learn of some danger that they extensively run to a dispute with it, thereby saving the master’s life. It continues to be a big priority before them. The faithfulness is seldom weakened among the pets. This is something no generous man would altogether dismiss instantly.

Opinion: Justice For All Genders Is What India Needs, Not A Divided Society