The Anti And The Pro: Are We Living In A Two-India Nation?

By marvel hela in Society

There is often a discourse that India comprises of two Indias — the rich India and poor India, a Brahmins’ India and A Dalit’s India and so on. But the contemporary concept of “two Indias” is based on pro-government and anti-government policies of India.

The farm bill controversy on the issue of MSP, contract farming and essential food commodities has opened a Pandora’s box for debate. The majority of farmers are against the reforms, while the other India, that of pro-government policies, has started protesting as Kisan Sanghrash Samiti in support of the bills.

However, this strife between the pro- and anti-government policy faction is not new — this confrontation existed during the CAA-NRC Act that oversaw a curfew in various regions across the country. This reflects the strength of our democracy, where every person is empowered to put forward their perspective regarding an issue through protests. This right to dissent has been as substantiated by Article 21 of the Indian Constitution. 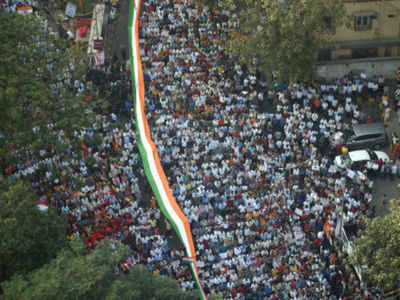 But the real concern that is on a rise is: for how long will this new “two Indias” concept continue? This division was enunciated by the pro-anti CAA rallies, but aren’t we moving in an era were a government with a special majority can pass any of the bills or even declare authoritative governance just like in a communist country? The two Indias can either lead to a demise of the population or a rapid passing of any legislation without any consultation. In this clash, the only conqueror is the government, similar to the third battle of Panipat in which the Britishers were declared a winner without even participation.

History is evidence that democracy is heading towards dictatorship, but this is not an overnight game. Rather, it’s a gradual process, the seeds of which appear in form of the two anti-pro government policy factions.

The Indian Constitution endured the dark age of Emergency in 1970s because there is only one section of society that knows their rights, while the other section defends their rights. Again, there is a need to understand one’s duty toward the sovereigns democratic virtue of India.

Also read: How Rural Development Policies Contribute To The National Economy In Bangladesh
You must be logged in to comment.

Truth is Out: Priorities Of The Indian Education Systems