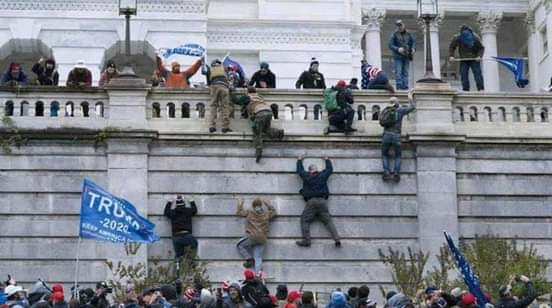 Visuals from the white supremacist riots at Capitol Hill

Fighting for a face became the role and goal of the protestors marching to Capitol Hill. How can anyone allow themselves to tolerate the injustice meted to Donald Trump? Not in their birth and capacity sound those occupying Capitol Hill. Well, don’t we know he was someone who always valued looking at us with great encouragement and inspiration drawing his support, spirit, and strength?

How can we let go it shouted the vandals expressing their confidence and conviction in a Trump who by all means and measures defines the Great American Dream backed by a vision of America first etched in decoupling the country from all forms and kinds of multilateral agreements and treaties. Thus, during Trump’s tenure, America withdrew itself from the Paris climate deal and Iran nuclear deal termed as one of the most lived liabilities of the United States.

Picking up on a policy ecosystem fulfilling the anxieties and aspirations of the native white population by assigning them choices for their own good and betterment. No matter if it had to do with the abuse, violation, and exploitation of the rights of the significant others. Anyhow accepting and honoring their seconding in the society and social structure marked by bigotry, backlashes, and xenophobia.

In my opinion, the rampage at Capitol Hill was nothing but an orchestration of the mobilization and organization of the Whites who are at a loss of control and command after Trump’s departure from the political scene of a disillusioned and disunited America crawling to securing its existence

Hope the incoming Biden administration carefully attends to this purpose of fact and ensures steps to mainstream their concerns if not otherwise. Trump may have gone but Trumpism will remain a gentle reminder for all of us.