Precisely post the declaration of civic bodies polls results in Gujarat, the two political parties, viz. the All India Majlis-e-Ittehadul Muslimeen (AIMIM) and Aam Aadmi Party (AAP), are truly thanking their highly-anticipated complacent luck in securing a political position in the state. Although it is nothing more than a political expansion, yet, it exemplifies a scene of how city voters support good, honest politicians who practice nicer politics. This kind of unexpected victory cannot be described only as an eyewash, given the post-lockdown political turbulence. 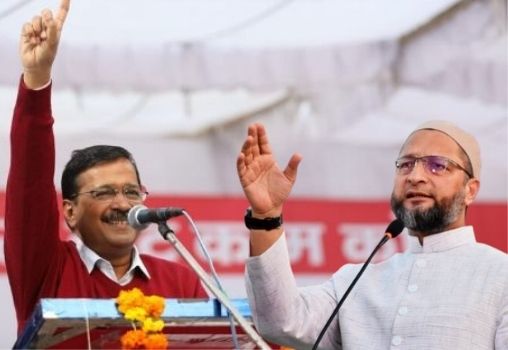 According to a news report, the AAP managed to win 27 seats in the Surat municipal corporation elections. Delhi CM Arvind Kejriwal will hold a roadshow in Surat on February 26, 2021, to thank the people of the city for voting in favour of his party. Meanwhile, Owaisi’s party has won seven seats, as the news goes.

What startles the competent political gazers in the two parties took entry into Gujarat politics through municipal corporation elections is a surprisingly awesome victory on a few seats. If the AAP watched the impressive victory in the civic elections of Surat as a triumph of Kejriwal’s Delhi model in Gujarat, the AIMIM discovered the big success of the popularity of Owaisi’s secular leadership. Following their respective incredible performances in Surat and Ahmedabad,  both political parties would have commenced seeing their political prospect in the western state.

However, The Wire writes: “Result of the municipal corporations of six key cities of Gujarat, including Ahmedabad, Vadodara, Surat, Rajkot, Bhavnagar and Jamnagar, are not an ode to the Aam Aadmi Party (AAP) and the AIMIM’s entry into Gujarat but an obituary for the Congress.”

Reacting to the results, Sanjay Raut said, “Surat is an important municipal corporation and the people have elected the AAP as the principal opposition party. Congress will have to think about it, we all have to think about it.” Welcoming the AAP’s success in Surat, he further said, “But why people rejected a big party like the Congress, in Gujarat or other states, the Congress’s fall in this manner is not in the interest of democracy.”

Also read: Opinion: Hindutva Is A Political Movement That Intends To Replace India’s Constitution
You must be logged in to comment.