By shakeel ahmad in Quick Bytes

The million-dollar question is, why has an octogenarian leader like Yashwant Sinha joined TMC? Is he interested in a Rajya Sabha seat from the party’s quota? Will his inclusion in the TMC fold help prepare the ground for fresh political alignment on the national level? 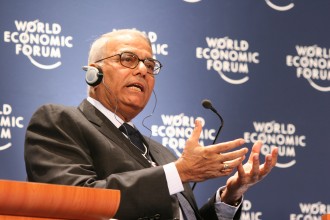 These are a few solid points that attract our straight attention on and off. The West Bengal election has emerged not only as a vital factor of political rivalry between the BJP and the TMC but also as a major front in the national battle against the BJP. It is visible with the farmer’s leader’s presence there.

One news-item says: Depending on the results of the Assembly polls, one or both of these seats could come the TMC’s way, and possibly Sinha could be accommodated. His entry into TMC may also be a sign of future alignments in national politics.

As everyone knows right now, Yashwant Sinha, an 83-year-old political personality, began thinking over entering into the TMC for politics. He ultimately finds his political aims in West Bengal. With the news of his joining the party, he has emerged as a more daunted public figure for whatsoever purpose.

He had no other choice than this, and he became an inseparable part of this political party now? He, thus, straight falls into a political pattern of three-dimensional politics which pitilessly reduces the politicians to a byword for the plausible younger generation. Why had this one instance, after the year 2018 when he left BJP not surprised us all so much. But it is not rare for those men who try to find out something new in unusual but reasonable ways.