By Rimsha Khan in GlobeScope

The origin of the problem went back to 1897 when some Jews living in Europe founded the World Zionist Organization. Zionists were the people who believed that Jews ought to be able to go back to Palestine ( what they called ‘a national homeland‘). It came as the reaction against the persecution of Jews in Russia, France, and Germany.

Britain became involved in 1916 when UK and France signed a secret treaty, the Sykes-Picot Agreement which divided the Ottoman provinces outside the Arabian Peninsula into areas of British and French control and influence.

In 1917, the British foreign minister, Arthur Balfour, announced that the British supported the idea of a Jewish national home in Palestine popularly known as the Balfour declaration. After 1919, when Palestine becomes the British mandate, large numbers of Jews began to arrive in Palestine.

Nazi persecution of Jews caused the flood of refugees, and by 1940 about half of the population of Palestine was Jewish. In 1937 the British Peel Commission proposed the 2 state theory which was rejected by the Arabs.

WWII made the situation much worse: in 1945, the USA pressed Britain to allow 100,000 Jews into Palestine but the British refused.

After this, Jews began a terrorist campaign against both Arabs and British. The British were weakened by the strain of WWII, felt unable to cope. 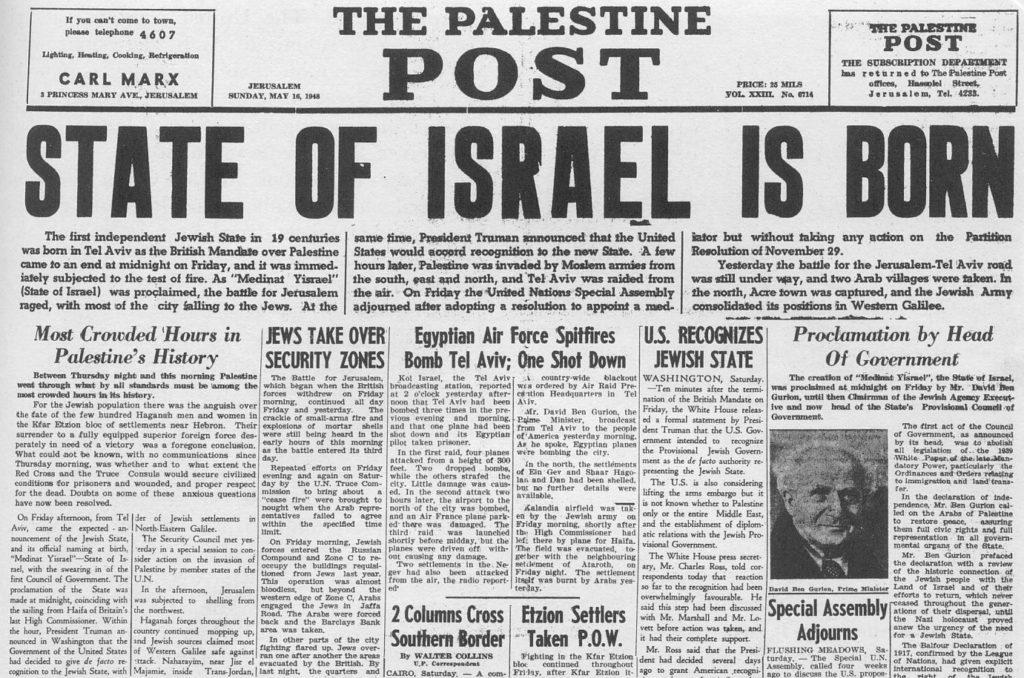 The Palestine Post’s front page when Israel was created.

In November 1947, the UN voted to divide Palestine. As Arabs were already enraged by the Jewish migration, the UN decision led to series of wars:

As the result, innocent Palestinians lost their home and were forced to migrate and live in the camps.
Some relief came in the form of the Oslo Accords through which Israel agreed to withdraw troops from most of the West Bank and Gaza Strip.

But even after the Oslo Accords, the terrorist state of Israel has constantly committed atrocities against Palestinians by attacking them, forcing them to leave their homes through the Gaza blockade and the list goes on.

Also read: “Sheikh Jarrah: History Shows That Empires Have Colluded To Legalize ‘Settler’ Colonialism“
You must be logged in to comment.

Opinion: Netanyahu And Bennett Are Two Sides Of The Same Coin