Quick Bytes: It Is A Known Fact That Copyright Kills Intellectual Liberty

By ANKAN in Quick Bytes

In what may be a landmark case related to copyright law, Delhi HC ordered online article and book repositories Sci-Hub and Libgen to stop uploading material from thousands of journals controlled by Elsevier, Wiley India and American Chemical Society. 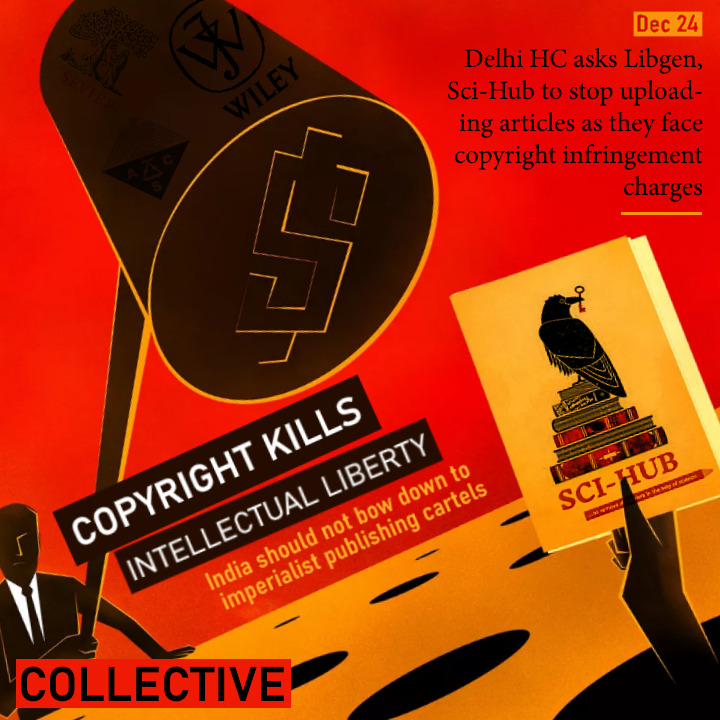 The petitioners are major imperialist cartels to whom academics and authors are forced to hand over their research because of their monopolistic market position as distributors. The bulk of hosting fees collected by them, amounting to crores paid as individual/university access charges, profit these corporations while writers and researchers see only a negligible share of the royalty.

Ironically, ‘copyright infringement’, that is, disputing these corporations’ private ownership of intellectual resources produced by academics, is being used against Sci-hub and Libgen.

Under NEP 2020, public universities in India are constantly slashing research funds and cutting journal subscriptions. Meanwhile, several promises made at WTO and IMF by our leaders have forced us to accept an unfavourable intellectual property regime dictated by imperialist superpowers.

Sci-hub and Libgen are only workarounds inside a fundamentally unfree and exploitative scientific research ecosystem. Under capitalism, knowledge produced socially in public universities, using research subsidies borne by working people, through a division of physical and mental labour, is increasingly given private ownership.

Today, monopoly publishers control the bulk of the world’s intellectual resources. Their aims are not the scientific advancement of humanity but private profit. The fight to save public education is also a fight to ensure socially equitable and ecologically progress for society.

Earlier, a landmark verdict in the DU photocopy shop case (2012) had struck down similar copyright violation claims by citing ‘fair use’ provisions to protect academic freedoms. This was won after a campaign by students and professors.

Also read: “Online Schooling Is Breaking Me Inside”

While pushing for alternative intellectual property regimes that socialize control over them through public investment in research and publication, we must also defend existing platforms committed to sharing research and breaking the barriers to scientific knowledge. Indian institutions must stand up to bullying by major multinational corporations to forge our independent path to development.

Quick Byte: But What About The Mental Health Of Schoolchildren?