The Birth Of Lord Krishna: A Story Of Curse, Destruction And Wisdom

By Birbal Jha in Culture-Vulture

Lord Krishna Day, popularly known as Janmashtami, is celebrated to mark the birthday of Krishna. It falls on the eighth day of the dark fortnight of the Bhadrapada month (July-August according to the English calendar) in the Hindu calendar in India.

Notably, Krishna was the human incarnation of Lord Vishnu, who was born to destroy the evil king of Mathura whose name was Kansa. He was Krishna’s maternal uncle who subjected Krishna’s biological mother Devaki and father Vasudev to imprisonment for years for no fault of theirs.

Lord Krishna remains dear to all of us and hence, devotees celebrate Janmashtami with great enthusiasm and fervour across the country. To mark the day, Lord Krishna worships during Nishita Kaal; this is the time when he was born at midnight during the incarceration of his parents.

Lord Krishna was born to Devaki and Vasudev in Mathura. At the time, Mathura was ruled by Devaki’s brother Kansa who used to love his sister. However, when he got a prediction that her eighth child would kill him and destroy his kingdom, he subjected his sister and brother-in-law to imprisonment and swore to kill all their children to avoid his death. 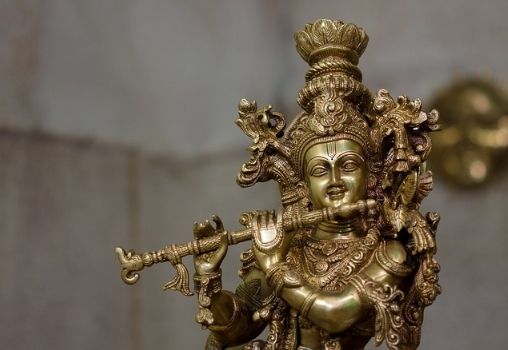 The cruel Kansa killed the first six babies while the fetus of the seventh one was transferred to Princess Rohini’s womb and the eighth child was born as Lord Krishna. It is said that when Lord Krishna was born, the whole kingdom fell asleep and Vasudev secretly rescued the newly born baby to hand it over to Nand Baba and Yashodha who were located at Vrindavan. Thus, Krishna was brought up in Vrindavan.

Once Krishna grew up, he killed Kansa and freed his biological parents from the clutches of his maternal uncle. Devotees all across, more particularly in Vrindavan and Mathura, celebrate this day with great enthusiasm.

Remarkably, the teachings of Lord Krishna are viewed as more of management science and something for personal growth. It is imperative to develop a clear understanding of his teachings in the right manner. A life devoid of the wisdom of the Gita is somewhere incomplete even in today’s era.

Also read: Photo Story: How A Puja Committee Is Using Gold Masks To Spread Awareness
You must be logged in to comment.

70 Years Since The First Video Game, Has The Industry Turned Inclusive?